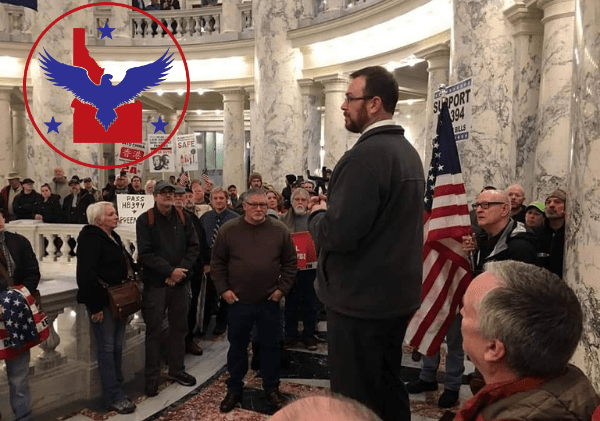 It was recently announced that I have been appointed as the State Vice Chairman for the Constitution Party of Idaho.

I want to address concerns that some of my friends may have about joining CP-Idaho. Additionally, let’s address some of the myths and lies that are likely to be told as a result of my decision.

In Idaho, the establishment GOP continues its assault on conservatives in an effort to bring in more “Republicans” who wouldn’t mind seeing Idaho turn into another state like California, Oregon, or Washington.

The Idaho GOP platform is a good platform and there are some candidates who actually try to uphold the party’s principles. However, the establishment GOP itself helped stop a resolution last year that would hold candidates within the party accountable to the platform.

That means the establishment GOP wants to ensure that their portion of the party can continue acting like Democrats without any accountability.

While I admire all of my friends still in the Idaho GOP and support their effort to bring about more conservative values, it is my humble opinion that the GOP cannot be saved from within.

While some good conservatives have been elected, nothing has changed with the GOP, and with the recent Democrat walkaway campaigns, the party is likely going to move even further to the left over time.

What is going to take the place of the left-shifting GOP and how are you going to stop the GOP from becoming even more progressive with the influx of Democrats into the party? No one can answer that question and the answers that it would take to stop the takeover are not what the establishment GOP wants to deal with.

The modern Republican Party is not what most of us conservatives would want in a party that is supposed to stand for limited government.

Both the Democrat party and Republican party have sold out on a national scale to corporate interests and special interest groups. Power is the goal for the two major parties, not the principles of the candidates whom they support. For the most part, they only care about keeping their elected officials from losing seats to the other party.

I know what you are thinking though: “Greg, third parties have never worked, and what happens if the Constitution Party of Idaho does split the vote?“

Let’s address some of the biggest concerns about third parties and specifically about a conservative third party here in Idaho such as the Constitution Party of Idaho.

However, I believe the best way for third parties to gain traction must be to focus on the “lowest” levels of government such as school boards, city council seats, county commissioners, and state legislative offices. While running people on the top of a ticket is necessary for ballot access in many cases, the focus must be on smaller races where less of a percentage of the population is needed to win.

It should not be that difficult in a state like Idaho for people who are members of the Constitution Party of Idaho to win local races such as school boards and city elections, even if those elections become partisan races.

Realistically, in a very conservative state like Idaho, we have a lot of small towns where the party affiliation, whether Constitution Party or Republican, should be embraced by the populace.

The second and really biggest argument is that of “splitting the vote” and handing the other major party a victory.

Let’s discuss this “splitting the vote” concern for a moment. One thing you must realize is that our focus with the Constitution Party of Idaho is on the general election, and specifically in districts where Democrats cannot win.

Out of those 35 legislative districts, 19 of them are districts where the Constitution Party of Idaho AND Republicans could split the vote evenly and BOTH parties would still beat the Democrats?

That means that over half of the legislative districts could have members of the Constitution Party of Idaho win or split a race with Republicans and there is NO THREAT that a Democrat will win!

Imagine for a moment a legislative makeup where Republicans control 20 legislative districts, the Constitution Party controls 7 of them, the Democrats control 5 of them, and the other 3 are “toss-up” districts. What would that do to the narrative that the votes have been “split?”

The hardest part about this effort will be showing independent, unaffiliated, and disillusioned Republican voters that there is a way to doing it differently than how it has always been done.

If you want to continue the fight in the GOP primary system, that’s fine, and you should help conservative GOP candidates do what they can to win.

Tony Ullrich, the CP-Idaho Acting Chairman and I are trying to help conservatives get elected to office, no matter what party they are a part of. We are principled people and we want principled people to get elected. We also want to ensure that our party has a focus on stopping the liberal agenda that is sweeping our state right now.

It’s going to be a monumental task to pull off what we are trying to accomplish but as I said, nothing major ever changes without serious effort and ideas that are not mainstream.

Finally, a number of people may say something along the lines of, “Greg, if you switch parties you will probably never win an election yourself.”

First, yes, the odds of me winning an election would be hurt by switching to a third party that is really just getting off the ground. I understand that and don’t dispute the concern some of my friends have.

However, for those who know me, my focus has never been on running for office but rather I have focused on trying to defend liberty from the outside which is where I feel I am most effective.

That’s not to say that I won’t ever try or that we all don’t do something we feel we are called to do, but for now, the time is for other conservatives to step up and run for office.

The greatest lie in politics is that you owe your vote and loyalty to any party. Your vote should be for those who are principled and more importantly, principled in constitutionally limited government.

That being said, I hope you will go to the Constitution Party of Idaho website to sign up for the newsletter by going to IdahoCP.com/subscribe so you can stay informed. I also hope you will go to our Facebook page and “Like” it so we can continue the growth.

Even if you don’t wish to change your affiliation, I hope you will also consider a small donation to the Constitution Party of Idaho to help us grow and fight for conservative values.

For those who don’t wish to be harassed by the establishment GOP and the liberals, you can donate $49 annually to the Constitution Party of Idaho and your name does not have to be disclosed to the Secretary of State’s office like a donation that is greater than $50 a year must be.

6 thoughts on “Why I Joined the Constitution Party of Idaho”