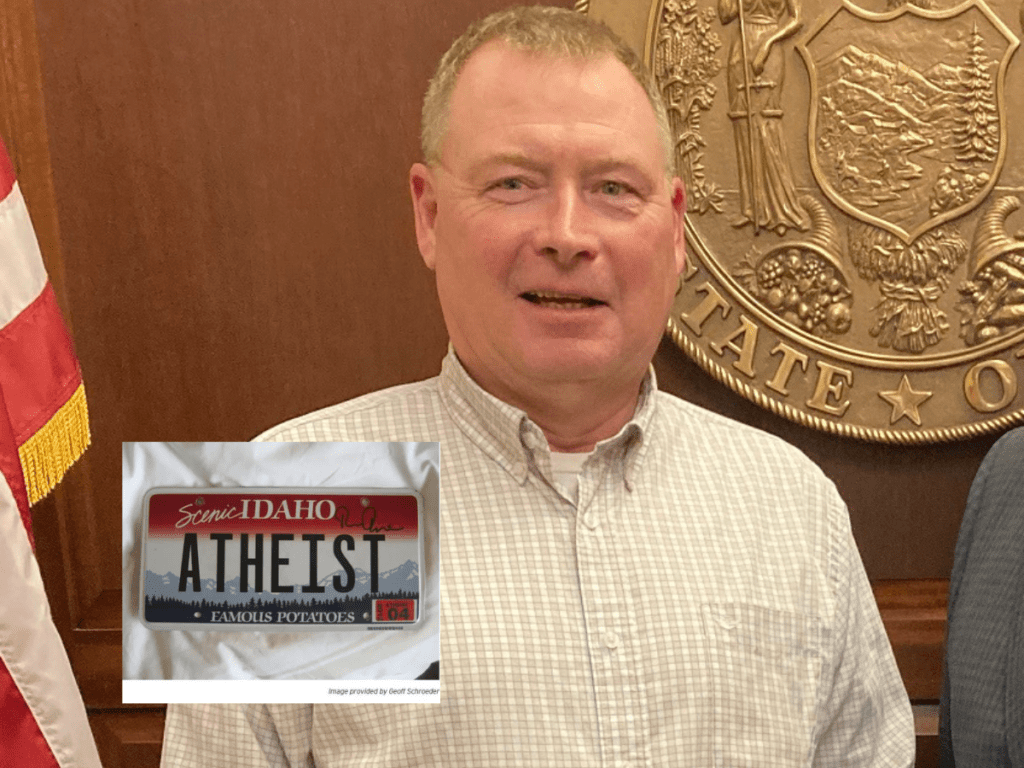 Most Idahoans knew that filling the shoes of Sen. Christy Zito would be difficult after she announced that she would be working with the Idaho Second Amendment Alliance.

Filling the role of a fierce fighter that stood up to the establishment and fought so hard for babies and the 2nd Amendment is not easy. However, the individual taking the place of Sen. Zito is far worse than I could have imagined.

Meet Geoff Schroeder, a future State Senator for District 8, who is an open atheist and also supports abortion.

First, on the killing of babies, Schroeder was interviewed by the Idaho Capital Sun in July. The topic of the article was abortion and contraception.

In the article, Schroeder is quoted as saying this about the killing of babies:

My grandfather was a doctor, and there’s so many different situations, ranges of ages and medical history that are beyond the expertise of any legislator. I don’t think it’s appropriate for us to weigh in, in advance of these things. It should be left to the doctor and the patient.

The position Schroeder takes in the article is the position on abortion that radical leftists like Nancy Pelosi, Chuck Schumer, and Joe Biden take.

I have never known a Republican, even a moderate one, who has been elected to the state legislature and spouted this kind of pro-baby killing nonsense. The Democrats in the Idaho capitol will have at least one Republican ally to count on when it comes to the abortion vote, thanks to Republican voters not doing their homework on Schroeder.

Why would an Idaho Republican even run with a stance like this? Maybe Schroeder lied to the people he spoke to while on the campaign trail? There is no way he told people this stance during the campaign.

How does a “Republican” even come to this point on the issue of abortion?

Perhaps it is Schroeder’s open atheist views that drove him to not care about unborn babies’ deaths.

Schroeder is an open atheist and doesn’t really hide the fact that he is, although you won’t find that on his campaign website.

If you want to be an atheist, you have every right to be. However, a Republican who doesn’t believe in God and is running for office in Idaho is really out of the ordinary.

Schroeder is so proud of his atheism that he apparently has a license plate that says “Atheist” on it, signed by notable atheist Richard Dawkins. Here is the image that was obtained by OnlySky media, which Schroeder sent to them, according to their website: 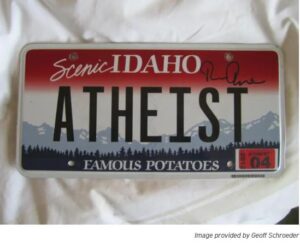 There is no religion test to run for office, and an atheist has every right to run, but seeing a so-called Republican tout this when Republicans are almost always people who believe in God is mindblowing.

So, how did Schroeder get elected to Idaho’s State Senate?

A significant reason was the divide among those who campaigned as conservatives. Three others also went for the seat: Rep. Terry Gestrin, Jon Krueger, and Gary Freeman.

Gestrin was the “incumbent,” so to speak, although a lot of the District wasn’t his before the redistricting. Gestrin certainly had more name identification than the other three people in the race.

Krueger and Freeman were also in the race and running as conservatives.

If any one of the other three challengers had dropped out, it is highly likely that Schroeder would have lost. He sure as hell wouldn’t have beat Zito, so this was the best-case scenario for Schroeder.

Make no mistake, Schroeder isn’t a conservative, doesn’t even pretend to be one, and was endorsed by leftist groups before the election.

First, on the issue of conservatism, go to Schroeder’s website and see how many times he uses the word “Conservative.” I’ll save you time because it is NEVER mentioned.

Second, Schroeder was endorsed by a fake Republican Political Action Committee called “Take Back Idaho.” There isn’t much you need to know about TBI other than one of their board members, a liberal named Jim Jones, who has openly told Democrats to switch to the Republican Party to vote in the primaries.

TBI endorses anyone who is to the left of Mitt Romney.

But, let’s pretend for a moment that you don’t mind TBI endorsing Schroeder because they claim to be Republican. Would an endorsement from a far-left extremist group change your mind about him?

The Idaho 97%, who really represent about 10% of the population, have made it their goal to attack conservatives. They will support liberal Republicans like Schroeder until the state turns purple enough that they can paint him as an extremist too.

The 97% are not moderates or bi-partisan, and they never attack liberal politicians or groups who are extremists. That’s because the 97% are extremists in every sense of the word.

Yet, when it came to the Idaho Republican Primary, the 97% felt that they needed to chime in with their far-left endorsements. (Article continues below.)

Any Republican who receives the endorsement of a far-left extremist group like the 97% should take a good look in the mirror and figure out if they are in the wrong party.

I’m not sure how long Schroeder will last in the Idaho State Senate.

Schroeder is only going to be in office because of Zito’s departure. I would be surprised if he makes it another term once voters realize who they have elected.

District 8 isn’t Lewiston or Pocatello that are considered much more moderate areas of the state. Instead, much of District 8 is very conservative. District 8 covers Custer County, Boise County, Valley County, and Elmore County.

So, how Schroeder got elected really is baffling, unless he never told people his actual stances and tricked them into voting for him.

Hopefully, District 8 voters will rectify this terrible excuse of a Republican in 2024.