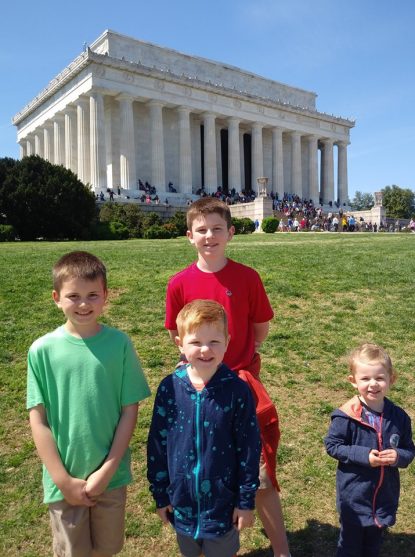 When I was growing up the homeschool kids were the “weird” ones that no one talked to. They always seemed socially “awkward” compared to kids who went to public school. There was an enormous stigma around homeschooling.

Years ago, when I was a missionary in Japan, I had a companion whom I served with that was homeschooled. He was a very nice young man, but he seemed to fit every homeschool stigma that I had grown up believing. He was nice, a little awkward, and didn’t seem to be able to communicate in a “normal” fashion.

My wife and I now have four kids of our own. We had our first two kids go through pre-school and then put them in one of the local elementary schools. I had no intention of homeschooling them.

Then one day, a parent-teacher conference changed everything.

As I sat down with my son’s teacher, I was bombarded with an absurd amount of information about how my son was performing on standardized testing. It went something like this: “He is doing great on this test and great on that test. Oh, and did I mention that we have even more tests coming up and so we will be preparing for those tests as well. If we do good on all these tests as a school, we can get additional funding.”

I was speechless. My son was in the second grade at the time and I felt as though he was a lab rat. This is NOT what learning is supposed to be for such young minds.

I came home and told my wife how appalled I was with the entire meeting. While homeschooling seemed out of the realm of possibilities just months before, I was now all-in on doing something different for my children than what they were currently doing.

The truth is that while we have many great teachers in our schools, the system is broken and getting worse.

Common Core is a disaster and turning our kids into testing zombies. The curriculums being taught are turning more progressive and anti-God each year.

Then there is the data mining on our kids. The government is keeping track of everything that they do at both school AND at home. Major changes to the education system are needed and it isn’t going to happen any time soon. For every David out there trying to change the system, there are 100 Goliaths taking them down.

We need more citizens demanding radical change to the public education system if it is going to be saved.

All of these concerns led me down the homeschooling path.

The reality is, homeschooling is much different than it used to be.

There are tons of different curriculums out there that you can use, and they can be tailored to your child’s interests in learning. At least in Idaho, that’s how it is. Idaho is one of the few states that is unregulated when it comes to homeschooling your children.

So, you may be asking, “What about the socialization of homeschooled kids?”

Years ago, this used to be a major issue and perhaps still is for some families. But the reality is that the “socialization” argument against homeschooling has been obliterated.

“Yeah, but what about the socialization they are missing at school?”

Do you mean when they are supposed to be learning? You mean the cuss words, anti-God discussions, pornography, premarital sex, and every other thing they learn from their fellow students and teachers?

Is that what they are missing out on?

Fast forward to today and my kids love learning at home.

In addition to having math, English, reading, and some other basic courses, we also teach them things they want to learn about. Isn’t that what learning is supposed to be for young kids? We force them into learning what we want them to learn and not what they are interested in.

Homeschooling also allows us to spend more time together as a family and we can do school wherever we go! Recently, we took a month-long trip across the country to visit family and attend a wedding. We did school along the way. We also go hiking and learn as we spend time together outdoors.

Schooling isn’t something your kids only do in a brick building. Schooling is something they should always be doing!

More and more families are turning to homeschool and coops. Not everyone has the ability or desire to do it though and that’s okay. Just be sure not to jump to judgment so quickly about people who do homeschool.

Finally, if you want to homeschool but just can’t, I implore you to take more time to do a little “re-schooling” from what they are learning in the current system.

The system is designed to turn your kids into progressive drones. You can undo much of that with re-schooling after they get home.

Finally, you MUST get involved in changing the system. Run for school board. Run for legislative office to change the laws. If running for office isn’t for you, then stand with other parents and demand changes in your school and to the system.

Nothing will change unless you demand it.

Perhaps if enough families drop out of the system and do homeschool/coops then the system will be forced to change.

Pray for God’s guidance in your life and how you can best educate your kids in this ever-increasing secular world.