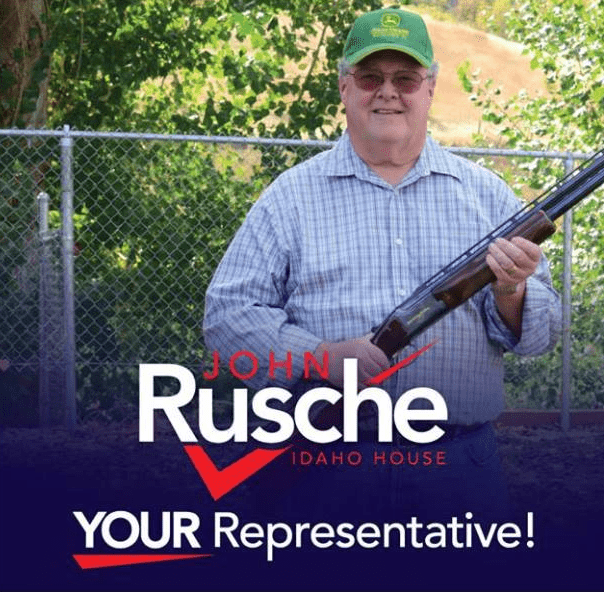 That means you are going to hear every candidate talk about how much they love the 2nd Amendment.

Most of them will have a staged photo-op or old hunting photo to “prove” their credentials to you.

However, it’s important to remember that being pro-gun is not the same thing as being pro-2nd Amendment!

You see, every candidate is going to tell you that they spent their whole life hunting.

They will tell you that they go target shooting all of the time. Additionally, they’ll have their family and friends scouring social media to tell potential voters how they shot with “Joe” growing up so they know he’s “pro-2nd Amendment.”

Perhaps these candidates will even tell you they own an “arsenal” of firearms.

Sadly, none of this matters when it comes to understanding the 2nd Amendment.

A candidate could own 100 guns, target practice every day, hunt every year, and not support or understand the 2nd Amendment.

The 2nd Amendment isn’t about hunting, target shooting, or collecting.

Unfortunately, during the campaign season that seems to be the focus of many candidates.

Quite a few of them ignore the last four words of the amendment, “shall not be infringed.”

To these candidates, the 2nd Amendment is a suggestion and they believe the power to regulate it belongs to elected officials in Boise.

There is a laundry list of excuses with these candidates, which also includes some current legislators.

Don’t these candidates understand that even Joe Biden and Moms Demand Action gun grabbers say they support the 2nd Amendment?

Why should we care about their promises if the best they can do is a Joe Biden campaign slogan about gun rights?

The problem is that voters don’t know that these candidates are so weak on the 2nd Amendment.

Too many voters simply hear a candidate say they support the 2nd Amendment and take it as fact. They rarely dig into specific issues on the topic.

Thankfully, the Idaho Second Amendment Alliance has a simple survey to help weed out the weaklings on the issue.

The funny thing is, the survey isn’t that hard to answer if you understand the 2nd Amendment.

But, for the weak-kneed candidates, the survey is likely to give them pause.

When they tell you they are pro-2nd Amendment, don’t let them get away with these lame excuses. Press them hard on tough questions.

There are other things you can do as well.

First, you can check the ISAA site and see if they answered our survey and how they did.

For instance, Wendy Webb is a Republican running for State Senate in District 21. She answered our survey with every question as anti-2nd Amendment.

Yet, on her Facebook page, she is claiming she supports the 2nd Amendment! 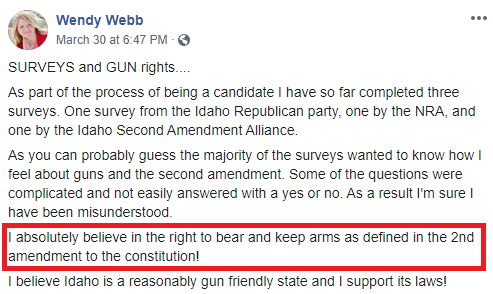 Now, how many people is she going to tell about her stances on specific issues? Probably none.

How many voters is she going to fool into believing she is pro-2nd Amendment? Probably many of them.

I actually admire that she filled out the survey honestly.

Many of the candidates who hold similar beliefs to her won’t fill out the survey or they’ll lie.

Don’t think for one second that Wendy Webb is the only anti-2nd Amendment Republican out there.

Second, you should not make any assumptions about a candidate’s 2nd Amendment stances based on their party affiliation.

We have had a number of Democrat candidates throughout the last eight years who have supported the 2nd Amendment as it was intended.

Finally, I hope you will follow the Idaho Second Amendment Alliance and our efforts to expose the frauds on the campaign trail. And there are a lot of frauds out there.

If you are a gun owner who believes in the 2nd Amendment and the words “shall not be infringed,” then be sure to join up with the Idaho Second Amendment Alliance today.

I would also appreciate your help in getting the Greg Pruett for Idaho Facebook Page to 5,000 supporters!

1 thought on “Being Pro-Gun & Pro-2nd Amendment is NOT the Same Thing!”