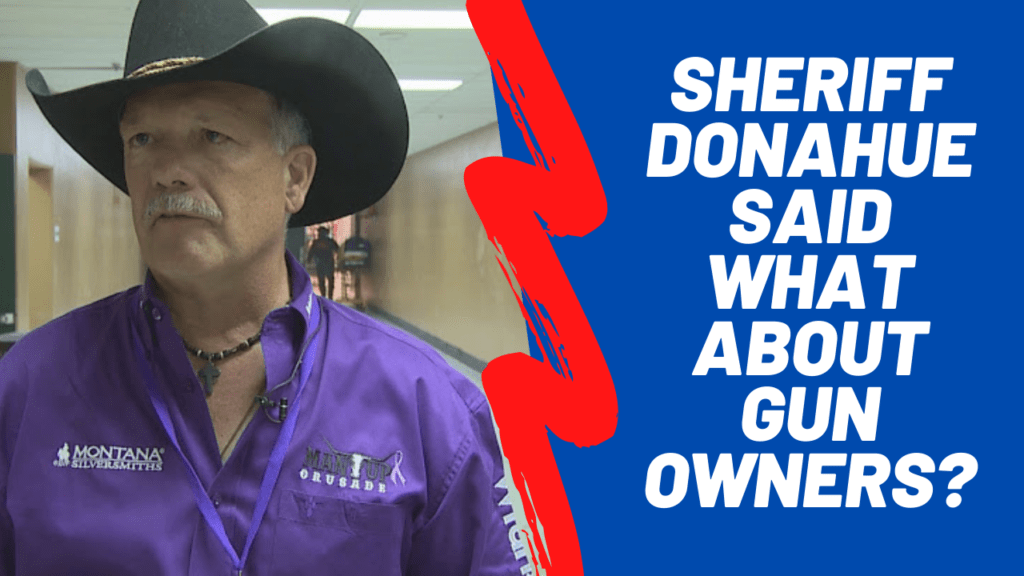 Yesterday, I had the chance to testify at a hearing on a “school carry” bill.

Our organization, the Idaho Second Amendment Alliance, ended up opposing the legislation because it would have potentially added a lot more restrictions to the current law.

However, what I heard from Canyon County Sheriff Kieren Donahue as he testified really angered me because he essentially said that private citizens just can’t handle the situation of an active shooter and only law enforcement should have firearms in those situations.

Below is a video of some of Sheriff Donahue’s rather demeaning and insulting commentary on Idaho’s gun owners (story continues below video):

I want to be clear that I don’t believe Donahue’s attitude toward gun owners is how everyone in law enforcement feels.

I know from personal experience that many officers “on the ground” support the 2nd Amendment. Many officers I have spoken to over the years do NOT feel the same way that their agency heads or lobbying arms feel.

And when you get to the more urban law enforcement agencies, that’s when you tend to find the more liberal and gun control supporting sheriffs and police chiefs who think gun owners are incapable of defending themselves or others.

The attitude from Sheriff Donahue was that you and I are incapable of carrying a firearm on school grounds just as we do everywhere else for self-defense.  The sheriff talked about the training that law enforcement officers do and discussed whether or not the officers would be able to tell you who is good and who is bad in those situations.

I testified at the hearing before the sheriff did and I discussed the argument some people have made that police won’t know who is good and who is bad, and I said that nearly all of these mass killings are over before law enforcement arrives.

Additionally, I said it likely wouldn’t be that hard to identify who the bad person is because they will be the one shooting at kids.

The argument has been for a long time that police would shoot the person with a gun who is trying to help. That simply hasn’t been the case in nearly all shooting incidents.

Oftentimes, the good guy with a gun stops the shooting before the police arrive and then holsters their firearm when the incident is over.

But rarely do police ever come into a situation where they start engaging someone in a firefight that is not the bad guy.

And let’s not forget that too often the police are not the fastest responders in those situations because they can’t be everywhere at once. That’s why teachers who are willing to take on the risk and responsibility of carrying a firearm should be able to carry one.

Ironically, after talking about how citizens shouldn’t be allowed to defend children in schools, Donahue says that the response time in some rural areas is anywhere from 10 minutes to 30 minutes.

Even in the urban areas, the sheriff admits it could be several minutes before law enforcement arrives to help! I don’t know about you, but that’s a lifetime if you are completely helpless and without anyone to defend you.

Yes, the police do train for specific active shooter situations.

And yes, we wish one of them was always in the right place at the right time. Yet, we don’t live in a situation where every child can carry a police officer with them at school.

Even the one resource officer who is at school can’t be everywhere at once and what happens if we have a Parkland situation where law enforcement refuses to go inside?

That’s why teachers who are not disqualified from owning or possessing a weapon need to be able to defend their school kids if they so choose to take on that responsibility. That’s certainly a better opportunity than waiting 10 minutes for law enforcement to arrive when a killer could go through their classroom in less than a minute.

We all want to protect our children and the debate has to be how we can most efficiently do that and what is most practicable here in Idaho.