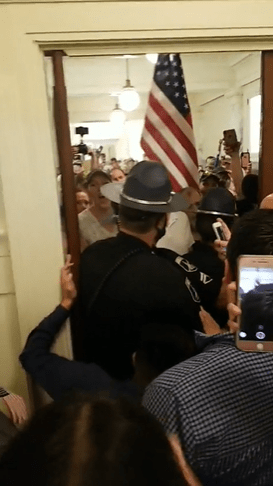 The first day of Idaho’s special legislative session was quite the day.

Forget the Republican National Convention. If you wanted some fireworks then the session was the place to be.

Before the session got underway, a large group of people was trying to enter the House Gallery to view the session and were initially prevented from doing so by Idaho State Patrol officers. During the scuffling back and forth, the glass window on one of the doors was unintentionally broken.

However, reading numerous articles, headlines, and tweets from the Idaho media indicated that the group of citizens deliberately smashed the window to gain access to the gallery.

So, the question is, was the glass broken intentionally, and did the media lie about what really happened?

First, you need to see the actual video in question so you can see what happened and then decide for yourself.

The video shows that the police were trying to push the door shut while several people in the crowd were trying to open it. As the door twisted under the pressure, the glass broke.

There was no intentional breaking of the glass. No one threw something threw it and no one hit it with their hand with the intention of breaking it.

After the glass was broken, other videos show Speaker Scott Bedke approach the crowd and tell them he will let them in but they have to be calm and not shout and chant.

He then instructs the officers to let them in and people calmly walk into the chambers.

Here is the video of the moment Speaker Bedke intervenes:

Now, let’s discuss how the media and some legislators described this situation when the door broke.

First, here is how the Idaho Statesman (reshared AP article) described the incident:

The way that this paragraph was written seems intended to tell the reader that the protesters couldn’t get in and so they broke a glass door and rushed into the gallery.

That’s quite a contrast to what the AP/Statesman posted and of course you have to love how they threw a reference to someone carrying a rifle, falsely called an “assault weapon.”

Next, Idaho Press reporter Betsy Russell tweeted this out,

Russell also falsely claims that the crowd smashed the door.

Of course, Russell was in a hurry as most media outlets are to drum up the “story” first. So in her expediency to “report” on the incident, she came up with this doozy of a headline:

What’s even sadder is that if you go to the article itself, the entirety of it is six sentences with no clarification on what actually broke the door.

Russell appeared to be in a hurry to get the headline out first in order to get the most clicks.

Of course, the Idaho Press crew wasn’t done yet trying to describe what didn’t happen at the capitol.

Keith Ridler came up with this headline for his article (AP reshared):

Again, another sensationalized headline designed to convince the reader that a glass door was shut and so the protesters broke it on purpose to get inside.

KTVB had this to say in their article about the day’s events when it came to the door situation,

Again, no mention of how the door is actually broken but the context of the paragraph is to convince the reader that the door was broken on purpose.

The Coeur d’Alene Press, Channel 8 News, and Idaho State Journal didn’t bother writing their own articles and instead just shared Ridler’s article. They changed the headline slightly but left the false narrative in plain sight.

Here is the Coeur d’Alene Press, Channel 8 News, and Idaho State Journal headlines which were exactly the same:

It should be noted by the way that this isn’t the “lawmakers’ session” but a session where elected officials, who should be working on behalf of the people, were to hold a session that must all be publicly available.

Channel 6 News (KIVI) was not quite as bad with their description but still seemed to indicate that entry was made after a glass door was broken.

While they also used the AP article, there also appears to be some edits by their staff and here is what they used,

It should be noted that glass was shattered on one door and the description of what happened after Bedke talked to the protesters is also missing. It was Bedke’s intervention that ultimately calmed the situation on both sides.

Several lawmakers also spoke about the door and falsely claimed that it was broken on purpose. Here is a tweet from Rep. Brooke Green (Democrat – Boise):

Now, I’m maybe willing to give Rep. Green the benefit of the doubt and perhaps she only heard what happened through the media and their blatant disregard for accurate information.

Who knows and I haven’t had a chance to ask her. I did comment on her tweet with the correct information though.

Rep. Blanksma (Republican – Hammett) is quoted in the AP article as saying,

I think it’s unfortunate that a few people felt they had to do damage.

Again, there is no evidence that anyone “felt” they had to do damage. I’m willing to bet that Blanksma was being interviewed and the reporter likely told her it was broken on purpose given what the media did with this incident.

However, Blanksma should know better and should have told reporters that she was going to look into the incident before commenting.

Is it fair and accurate to say that the door was broken when protesters pulled on the door and the police were pushing it in the opposite direction? Yes, that’s fair.

What about saying that if protesters hadn’t grabbed the door that it wouldn’t have broken? Sure, that’s also a fair assessment.

My problem is that the media did not describe what actually happened to the door and instead jumped at the chance for another sensationalized headline to get views for their articles.

While these same media outlets describe riots in Portland, Kenosha, and Minneapolis as “peaceful,” they then claim that it was “chaos” in the Idaho capitol because glass from one door was accidentally shattered?

There is a reason no one wants to talk to the media these days. Nobody trusts them!

And why would someone trust the media when they can’t accurately depict an incident with clear video evidence showing no deliberate intention by protesters to damage the building?

We need better media and we need to not be in such a rush to get the “headline” our first before others.

I am helping get a new media outlet in Idaho for political news called “Idaho Dispatch” and our goal is to put out balanced articles, without so much bias in the reporting, and only putting out accurate information.

I hope you’ll go to IdahoDispatch.com and let us know what you think of the articles.

2 thoughts on “Did Idaho Media Sensationalize Broken Door Incident at the Capitol?”