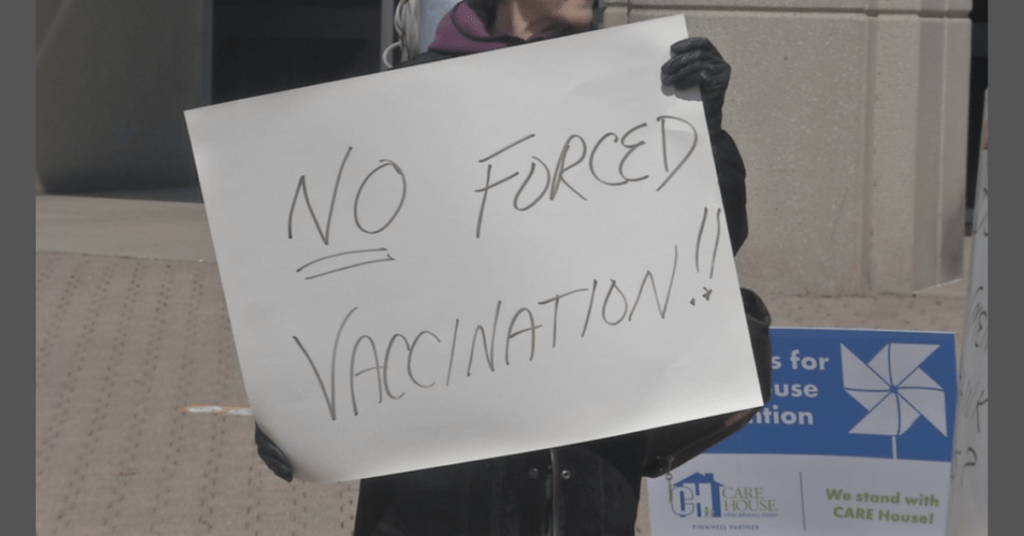 The United States is not so “united” these days.

A large portion of the country is pushing us towards full-blown socialism. Another large portion is watching it happen without a fight. A much smaller portion is trying to stop the destruction of our Constitution and limited-government values.

Forced vaccinations are leading us down a dangerous road that only tyrants would use.

A large chunk of the left doesn’t just want to get their own COVID-19 shots. They also want to force other people to get them as well.

Whether an individual chooses to get a vaccine or not should be their choice. Individuals should determine for themselves what medicines they want to take.

Our bodies are all different, and no one drug can be guaranteed to be “safe and effective” for everyone.

It’s dangerous to tell someone to put something in their body when you have no idea how it will impact their body and what damage it may cause them. You or an employer certainly aren’t going to take responsibility for someone having a bad reaction or dying from the COVID-19 shots, are you?

However, what’s even more dangerous is the power that the government has seized during COVID-19.

Local health districts, county commissioners, state legislators, governors, presidents, and other people in power have seized the COVID-19 narrative. They are pushing policies reminiscent of tyrants who have reigned in terror in other countries.

No longer is the COVID-19 situation “15 days to flatten the curve,” but instead, what we are witnessing is “500 days to expand government power indefinitely.”

Governor Kate Brown of Oregon just reinstituted a mask mandate outdoors, even if you have been vaccinated. She is issuing the edict despite the government telling us that all we needed were the vaccines, and life could go “back to normal.”

Lockdowns are beginning again across the country. Mask mandates for our kids in schools are being pushed once again. Some citizens want more government control over which businesses should be open right now, even after a devastating year for our small business owners.

The economy is not doing well, and some people want more shutdowns and government edicts over their lives? Well, elected officials like Kate Brown and others like her are more than happy to keep their power and expand it indefinitely.

No, I’m not comparing these individuals to tyrants like Saddam Hussein. Still, the type of power-hungry policies being implemented are the types of policies that people like Saddam used to gain control over his people. And with the media instilling constant fear in people, it’s no wonder citizens are asking for government intervention.

Right now, some Americans want the government to force vaccination on other citizens with a chemical mixture that has already proven to be ineffective at stopping the “Delta variant.” How long before these same people say we need forced vaccination to stop the “Echo variant” or the “F Your Freedom-variant.” These government lemmings will demand more required shots, more masking, and more individual liberty being given up in the name of “safety.”

What we are witnessing in this country brings me back to my time in Iraq with three of my brothers, who were also deployed with me.

In 2005 I flew down to Tikrit, Iraq, with three of my brothers for an interview on MSNBC. We did the interview from inside of one of Saddam Hussein’s palaces.

Saddam’s palace was gorgeous and immaculate. Compare that to the tyranny he imposed on his own people, many of whom lived in extreme poverty.

During my one year in Iraq and visiting various places across the country, I remember thinking to myself, “This is the result of tyranny. We cannot let this happen in the United States.”

Tyranny isn’t a word I like to use lightly because I have seen the results of it firsthand. It’s ugly and eventually is fully implemented at the end of a barrel of a gun. I have seen what true poverty looks like. I have seen and know what the Iraqi people have gone through, and most of us understand what a horrible human being Saddam Hussein was.

Yet, right here in America, we are terrorizing people for the individual choice and liberty they are making for not putting a chemical in their bodies and telling them that they can’t live their lives unless they capitulate to their demands.

How long before these same people want to force vaccinations using the threat of violence from the government to do so?

I implore our elected officials, government agencies, and any citizen pushing forced vaccinations to stop what you are doing before it’s too late.