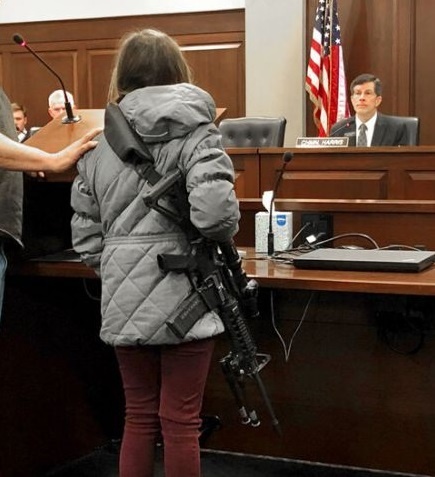 Earlier this week Idaho passed HB 516, an expansion of their Constitutional Carry law, through the House State Affairs Committee.

But it wasn’t the pro-gun bill moving forward that caught the attention of the nation.

No, that would be 11-year-old Bailey and her grandpa who testified at the hearing. Bailey was sporting her AR-15 in the committee hearing.

You see, in Idaho, there are no restrictions on carrying inside the capitol while you are attending a hearing for a bill.

Open carry and concealed carry are both allowed, and without a permit, I might add.

So, when local media outlets posted a picture of Bailey and her AR-15, the entire nation took notice.

Of course, you can imagine the complete meltdown gun grabbers and hoplophobes across the country had when they saw this picture.

The attacks on gun owners for this young lady even holding an AR-15 sent them into a frenzy.

Even Moms Demand Action founder Shannon Watts, tweeted about it.

They touted a grandfather and his granddaughter exercising their 2nd Amendment rights as “not normal.”

And then, of course, there were the comment sections filled to the brim with hateful and idiotic comments.

Here are a couple of the comments we captured.

Watching the national media meltdown over a girl carrying a rifle is rather amusing. It always is.

Then again, we have to deal with the stupidity of gun-grabbers calling AR-15’s “assault rifles” and every other incorrect terminology out there.

For now, enjoy the meltdown and share this article to continue the effort of annoying a gun grabber near you.