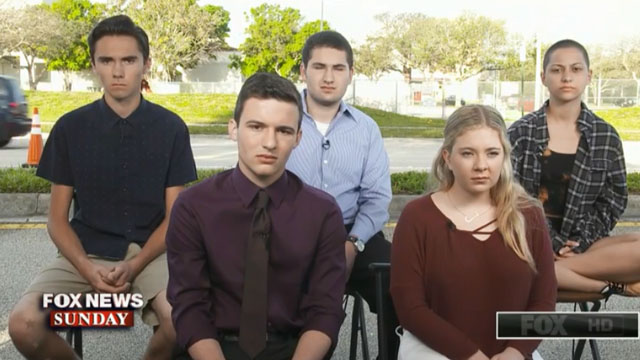 Donald Trump is the President. Republicans have full control of Congress. Historically this type of control is short lived as the political pendulum swings in the opposite direction during the mid-term elections.  One of the primary reasons this happens is because the voters whose party is in power become apathetic and less inclined to vote.

On the opposite side of the spectrum, the side who has no power in Congress becomes angry, mobilized, and determined to take that power back. That is likely where we were headed before April of 2018.  The left had tremendous momentum and Democrats looked to be on track to take many seats in Congress.

And then David Hogg happened.

In the aftermath of the Marjorie High School mass shooting, the media pounced on several kids who took up the gun control mantle.  Kids like David Hogg, Emma Gonzales, and Cameron Kasky became nationally known within days of the tragedy.

The media had found the pawns they sought to push their gun control agenda. Bloomberg, Moms Demand Action, and celebrities across the country saw an opportunity to use these kids to get involved in a fight they know nothing about. The talking points by the Parkland kids is nothing more than a regurgitation of the same old talking points we have heard for decades.

What the media and seasoned gun grabbers didn’t expect was the Parkland kids to become as openly radical as they would become. They went on a nationwide rampage against gun owners and against the 2nd Amendment. Sometimes these young folks would use the most vile and inappropriate comments about guns and gun owners where a seasoned gun grabber would know how to muzzle their true feelings. This wasn’t the case with the Parkland kids.

Their radicalism could potentially be their fatal error come election time.

There is one issue that conservatives will rally around without fail; guns.

Bloomberg, Moms Demand Action, and the Parkland kids thought that following the mass shooting in Florida, the public was on their side in severely restricting the 2nd Amendment.

The short-lived sentiment following the Parkland shooting was quickly replaced by reality as the public remembered that gun control isn’t followed by people determined to harm others. As the attacks on gun owners increased to new levels, gun owners became incensed and mobilized.  What the progressives seem to forget is that gun owners will literally vote based on a candidate’s 2nd Amendment beliefs alone.

And that anger towards gun grabbers is exactly what we are seeing in the pro-2nd Amendment community right now. Gun owners are fed up with being blamed for atrocities committed by deranged and mentally unstable individuals. Ultimately, this is what will drive gun owners to the polls in November, where they may have otherwise sat at home and forgot all about them.

Additionally, you have gubernatorial candidates in even the reddest states (Idaho, Georgia, etc.) that are going all out for gun control. They are breaking from traditional campaigning in those states and banking on the public being behind infringements on the 2nd Amendment. This methodology has backfired numerous times, including the 2016 elections, and I don’t see it working this time.

To the gun grabbers in Parkland and elsewhere in the United States, we encourage you to continue to run your mouths about gun rights in America. Please continue to talk about how you want to remove our guns or severely restrict the 2nd Amendment. In the end, you will suffer for it at the ballot box.

In November we will find out which strategy was the most successful and whether gun grabbers overplayed their hand (I believe they did) to the detriment of their candidates at the ballot box. There is still a chance they can turn the ship around, dial back the gun control talk, and focus on something else that citizens are actually upset about.

Here’s hoping that the gun grabbers ignoring my advice.

2 thoughts on “Have Gun Grabbers Overplayed Their Hand?”