You couldn’t find a hotter topic in the 2nd Amendment community than Red Flag laws.

Even here in Idaho, it is one of the biggest gun-related topics we hear about. Idaho’s gun owners want absolutely no version of Red Flag laws to pass in the Gem State.

With 17 states now implementing some form of Red Flag laws, there is growing concern that Idaho may eventually look at passing one of these unconstitutional laws.

After all, Republicans have helped them pass in Indiana, Florida, and Illinois. And Republican lawmakers in Utah, South Dakota, and Kentucky are trying to implement them as well.

It isn’t just Democrats trying to stab gun owners in the back, it’s Republican lawmakers as well.

So what is the feeling amongst Idaho lawmakers on the issue? 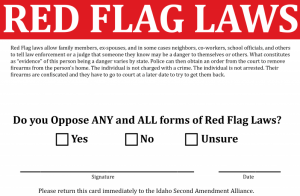 Before we look into that question, let’s first remind those unfamiliar with the term “Red Flag law” what it means.

Generally speaking, a Red Flag order is issued by a judge to confiscate someone’s firearms who is accused of being a threat to themselves or others.

In most states, a family member or someone with a close relationship to the individual contacts the police and tells them they believe the person may be a danger to themselves or others.

The individual making the accusation then meets with a judge at an ex-parte hearing. Ex-parte means that the person who is being accused of being “dangerous” has no clue this meeting is taking place.

The judge looks at the “evidence” to determine if the person making the accusation is right. In some states, something as simple as “recently purchased a weapon” is used as “evidence” that you could be a danger to yourself or others.

If the judge issues the order, usually for one year, and the police arrive at your home to confiscate your weapons.

Remember, you didn’t even know the police we coming.

But they are on your doorstep, demanding that you give up your guns because someone says you are a “threat to yourself or others.”

The police then depart with your weapons and tell you that you have to come to court on a specified date and prove that you are not a danger to yourself or others.

You are now guilty until you can prove your own innocence!

Does that not sound like something straight out of Nazi-Germany? 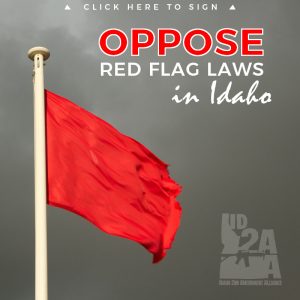 And it’s only getting worse.

In California, they expanded their Red Flag orders so they could issue them for five years! Imagine not being convicted of a crime for half of a decade but not being able to defend yourself despite your innocence.

And like most gun control laws, they will continue to expand.

We saw this in 2019 in response to the first version of Marsy’s Law that contained language very similar to what is used in Red Flag laws.

Gun owners mobilized in massive numbers and asked lawmakers to stop the bill before it opened the door for a judge to implement a Red Flag style order.

Thankfully lawmakers heard gun owner’s concerns and removed that portion of the bill.

So, where are our Idaho lawmakers on this issue?

Last year the Idaho Second Amendment Alliance sent all of them a postcard that asked specifically “Do you oppose any and all forms of Red Flag laws?”

A simple question that gave them three possibilities: Yes, Unsure, and No

We received about 20% of the cards back with most of them being in the “Yes” category. (A full list is at the bottom of this post.)

I sat down with both Representatives and talked to them about their concerns and questions with Red Flag laws.

To be fair to lawmakers in Idaho, many of them don’t know a lot about this issue and our goal is to make sure they understand it clearly and also understand gun owners’ fierce opposition to them.

Rep. Andrus has told me that he doesn’t do “absolutes.”

I explained that by saying you don’t do absolutes, the only conclusion we have is that there is some form of a Red Flag law that he would support.

Rep. Brent Crane’s response of “Unsure” is even more concerning for me.

Now, to date, I have not talked to him about this issue since last year so it’s possible he has a new position on the issue.

But at the time, I was somewhat alarmed. Rep. Crane votes pretty conservative on most issues and has always been a strong defender of gun rights in Idaho.

For him to say he was “Unsure” if he would oppose all versions of Red Flag laws was very concerning.

If Rep. Crane was unwilling to oppose all versions of Red Flag laws, then surely other Republican lawmakers who don’t vote as conservatively as he does are even more susceptible to accepting them.

This is why the Idaho Second Amendment Alliance is trying hard to get answers for gun owners from their lawmakers on this issue.

I was told by one State Senator this year that gun owners don’t care about the pledge against Red Flag laws, and that it was just me who did.

Out of curiosity, we asked the members and supporters of the Idaho Second Amendment Alliance in an online poll if it mattered to them that their legislators signed a pledge opposing any and all forms of Red Flag laws. 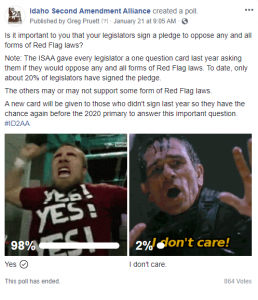 The results were not surprising to me at all. Out of the 860 respondents, 98% of gun owners said the pledge to oppose all forms of Red Flag laws by their lawmakers was important to them.

Idaho lawmakers should not underestimate how important this issue is to gun owners in their districts.

We will once again be sending out the pledge cards to lawmakers who didn’t sign last year. We’ll also give them additional information to help them understand the issue more clearly.

Now, I want to address one other issue that some Idaho lawmakers seem to be using as an excuse to not even discuss the issue.

The very last sentence of Idaho’s Constitution reads, “Nor shall any law permit the confiscation of firearms, except those used in the commission of a felony.”

On the outset, it seems as though Idaho’s constitution would prevent Red Flag laws.

But alas, lawmakers always have a way of writing laws that would get around this type of constitutional restriction.

For instance, Rep. Melissa Wintrow (Democrat) ran a bill last year for those convicted of misdemeanor domestic violence which would require the individuals to hand their guns over to a family member or friend not currently living under the same roof.

In other words, the police would not confiscate your guns, but you would have to give them to someone else so they were no longer in your possession. In my mind, this is still confiscation because I am being forced to give up my guns but the courts aren’t likely to see it the same way.

Confiscation is usually thought of as the government taking possession of your guns.

In my opinion, there is still too much wiggle room in Article 1 Section 11 of our state constitution that a “workaround” could be done for Red Flag style laws.

And this is just one example.

There are probably a number of other ways that lawmakers could pass a law that implemented some form of Red FLag laws.

This is why gun owners are concerned and why lawmakers should not balk at the chance to go on record opposing any and all forms of these atrocious and unconstitutional laws.

To our gun-loving friends, be on the lookout for when the ISAA distributes the Red Flag cards once again, and then contact your lawmakers to ask them to sign it.

It’s an election year after all and what better issue is there to determine who is really going to stand up for you than Red Flag laws?

When lawmakers or candidates will go on record opposing any and all forms of Red Flag laws, that is a victory for all Idahoans.

6 thoughts on “Idaho Lawmakers and Red Flag Laws. Are They Possible in Idaho?”