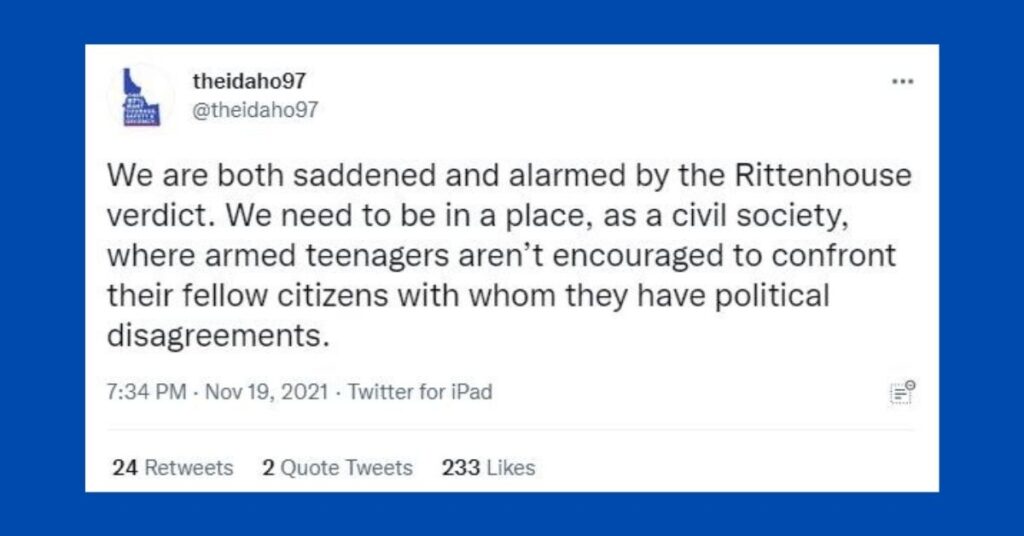 The Idaho “97%” exposed who they are even further after the Rittenhouse verdict was announced.

I think most Idahoans knew who the group was when they started. One of their leaders was a lobbyist for Michael Bloomberg’s Everytown for Gun Safety, an extremist gun control group that seeks to destroy the 2nd Amendment.

The Idaho 97 claims to be a moderate group fighting “extremists” in Idaho. But, of course, this fight against “extremism” is nothing more than a projection of who the Idaho 97 is because they are liberal extremists who would turn Idaho into a Democrat stronghold given the opportunity.

Just in case you needed an example of who these folks are, here is what the group posted on Twitter following the Rittenhouse verdict: 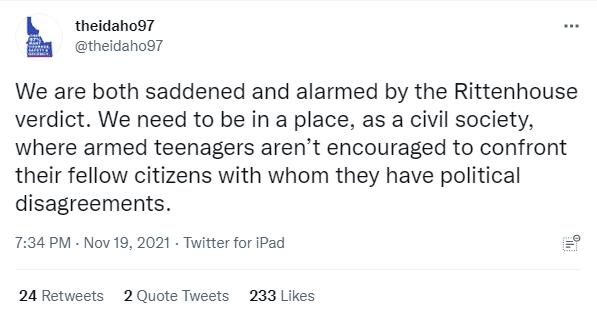 The Idaho 97 says that they are saddened and alarmed by the Rittenhouse verdict?

No one who watched the entire trial could have reached any other conclusion than what that jury did. Heck, even if Rittenhouse was guilty, the prosecution was absolutely awful during the trial.

Rittenhouse was innocent and what should “sadden” these liberal extremists is that Rittenhouse was ever tried in the first place. There was zero evidence to support the prosecution’s claim that Kyle murdered anyone or even acted recklessly with his firearm. In fact, if you watch the video evidence, Rittenhouse was actually pretty careful NOT to start shooting anyone near him while he was being attacked. He only fired at those who were physically attacking him.

What’s more, there was a ton of video evidence that all supported Rittenhouse’s claim of self-defense. So if we are going to be “saddened and alarmed” at anything, it is how the case was political and not based on actual evidence.

Next, the Idaho 97 says that we need to be in a place where armed teenagers need to not confront their fellow citizens they disagree with politically.

Is this extremist liberal group even aware of the events leading up to Rittenhouse being forced to defend himself? Did they pay any attention to what happened in Kenosha days prior?

The city was burning to the ground in the wake of the Jacob Blake shooting. Businesses were being destroyed, and the police were basically doing nothing about it. In addition, business owners were getting frustrated that the National Guard was not being called in to quell the violence by rioters.

Some businesses started asking for help in stopping the looting and the rioting from regular citizens. Some businesses and community members wanted to start cleaning up graffiti, trash, and other damage done by rioters, and so they did.

Rittenhouse may have had disagreements with the politics of the rioters; I have no idea. The odds are that he did, but the real reason he was there, as supported by video evidence, pictures, and eyewitness statements, was to help Kenosha from being destroyed.

There are pictures of Rittenhouse cleaning up graffiti. Video evidence and eyewitness accounts show that he was trying to help protect a car lot from being burned to the ground. Additionally, Rittenhouse was trying to help put out fires, as evidenced by videos of him running around with a fire extinguisher. He was providing medical aid to ANYONE who was injured and even helped break up a confrontation that was taking place earlier in the night.

By all evidence presented at trial, Rittenhouse wasn’t there to do anything other than help a community that he was a part of. He wasn’t there to argue with BLM rioters, and he wasn’t there yelling in people’s faces about the Jacob Blake shooting or anything else based on any evidence that anyone has provided from that night.

But sure, let’s ignore all of the facts, completely ignore what happened in the trial, and blame the jury for their verdict.

The Idaho 97 wants a more civil society, and yet they don’t believe in due process? Rittenhouse faced a jury when he really shouldn’t have and was found innocent by that jury. That’s the American process for determining the guilt or innocence of a crime.

The Idaho 97 is who most of us knew they were when they started. It is nothing more than a fake “moderate” group trying to trick unsuspecting RINOs into helping the liberal agenda in Idaho.

Hopefully, after this tweet on the Rittenhouse trial by the Idaho 97, you won’t need to see anything else from them to know who they are and what they want Idaho to be.