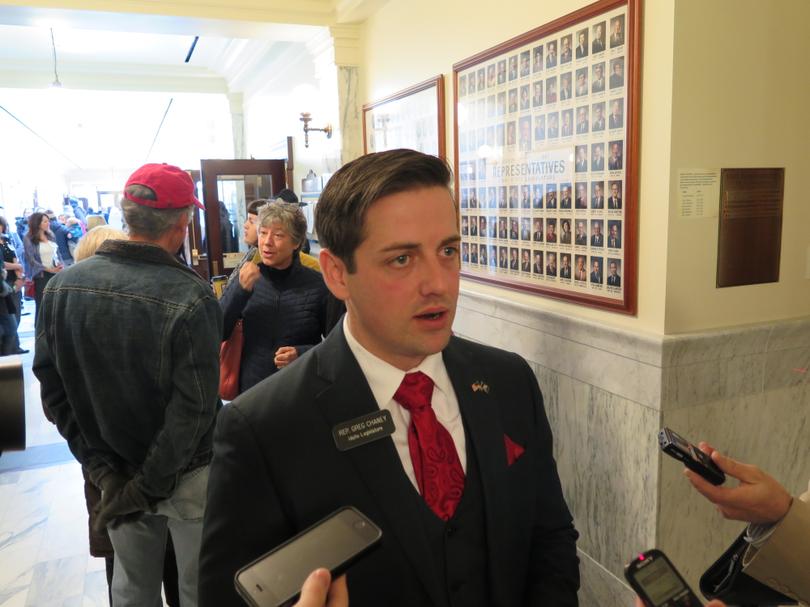 We have wrapped up the first week of the 2021 Idaho legislative session.

To my knowledge, the opening week has been very calm and none of the turmoil from the “special session” has happened. In fact, I have been at the capitol almost every day during the first week and the place is a ghost town.

That didn’t stop one Republican lawmaker from attacking free speech and implementing very questionable practices for searing citizens inside the capitol though.

Rep. Greg Chaney (Republican – District 10 – Caldwell) is proposing a change to House Rule 64 to give Chaney and other Chairmen more power and the ability to throw people out of their committee rooms for doing almost anything.

Sure, some of the proposal is understandable such as prohibiting clapping or cheering during the meetings. It’s understandable that signs are prohibited in committee rooms because they would cause a problem for people behind the signs to be able to see what is happening.

But there are several problems in Chaney’s proposal which are rather concerning.

First, Chaney’s proposal would ban political attire in any place controlled by the House such as the chambers and committee hearing rooms. This means that organizations like the Idaho Second Amendment Alliance, NRA, and any other group would be banned from their members wearing a shirt or hat with their logos on it.

Here is the exact phrase contained in Chaney’s proposal:

“Clothing designed to promote political platforms may not be worn in the House lobby, gallery, or committee rooms while the House is in session or during a committee meeting.”

Do you want to wear your favorite shirt to support the 10th Amendment? Forget about it if Chaney’s proposed rule change goes through.

At a time when free speech is under assault from the left and leftist platforms, Chaney, a Republican, is advocating for telling Idahoans what they can wear inside the capitol?

Why doesn’t Chaney just tell Idahoans they have to wear church clothes to the capitol and ban earrings or orange hair?

I have been going to the capitol for years and I have never seen any issues with people wearing political attire.

It shouldn’t matter what issue you are advocating for, you have a right to wear what you want inside the capitol. I may disagree very strongly with groups like Moms Demand Action, Planned Parenthood, and other leftist groups, but I certainly don’t care if they wear a t-shirt.

We should be much more concerned with their policy proposals.

This issue alone should necessitate killing Chaney’s rule change. But that wasn’t the only concern that a number of lawmakers and other activists have approached me about with Chaney’s proposal.

Chaney’s proposed rule change also allows him to search citizen’s bags and purses to search for items that are dangerous to people or property.

Here is the exact phrasing in Chaney’s proposal:

“Bags of all types may be subject to a visual inspection for items capable of injuring, damaging or harming persons or property in House-regulated spaces.”

How are these items even defined? Someone could do a lot of damage with their car keys by gouging someone’s eyes our right?

What’s even more confusing though is that in Idaho you can carry a firearm, knife, or other deadly weapons into the capitol. Idaho is one of the few state capitols left in the country where citizens and lawmakers are all on equal ground inside their capitol building.

We have laws specifically prohibiting the government from regulating these items so how does Chaney intend to get around the law with a House Rule?

If Chaney decides to have citizens searched before entering “his” committee room, what is he going to do? If a female is carrying a firearm in her purse does Chaney intend to prohibit that individual from entering the committee room and on what legal grounds does he believe it would stand?

Is Chaney hoping to create a “gun-free zone” in the capitol? I’m seriously confused about what this particular part of the rule would accomplish.

There are serious questions in my opinion on whether such a search violates Article 1 Section 17 of Idaho’s constitution which prohibits unreasonable searches.

It apparently isn’t enough that Chairmen in Idaho’s capitol have the power to shove bills in their desk drawers but now Chaney wants to give them even more power in the capitol.

Perhaps Chaney isn’t the only one trying to push this rule change. I can’t be certain others aren’t behind it as well but his name is on the proposal and he is the one who introduced it.

Chaney’s desire for changing the rules likely comes after a tense and chaotic “special session” in August of 2020.

Chaney was heckled and dealt with people clapping, cheering, and booing during the three-day ordeal in the Judiciary and Rules Committee for which he is the Chairman. I have always felt that citizens attending these meetings should refrain from such activity as our style of politics in America is one of decorum and civility during official political meetings.

However, after months of not being heard, citizens had grown frustrated with their government and people did not act appropriately at times during the special session.

Despite those behaviors, I see no reason to make these changes and banning what people wear and allowing security to just search people’s bags without cause crossing the line.

Lawmakers have a tough job. Legislators are constantly dealing with anger and frustration from both sides of the political spectrum.

But that is part of the job.

They know they have to deal with people who are not happy with their decisions.

Yet, for some reason, Chaney felt the need to create more rules. That’s not what Republicans should be about.

That’s something the left typically does. A mass shooting for instance always leads to calls for gun control from the left.

They don’t want to focus on the millions of good people who use guns responsibly during any given day, they want to make all of us suffer for the actions of a few.

Chaney is using the same tactic by justifying his rule proposal because of the actions of a few.

I hope lawmakers will oppose the change to House Rule 64 and remind Chaney that our goal is to limit government power, not increase it. I would encourage each of you to go to your two House members and tell them to oppose it as well.

The image below contains the full rule change with the “underlined” words representing what Chaney wants to add to the rule. 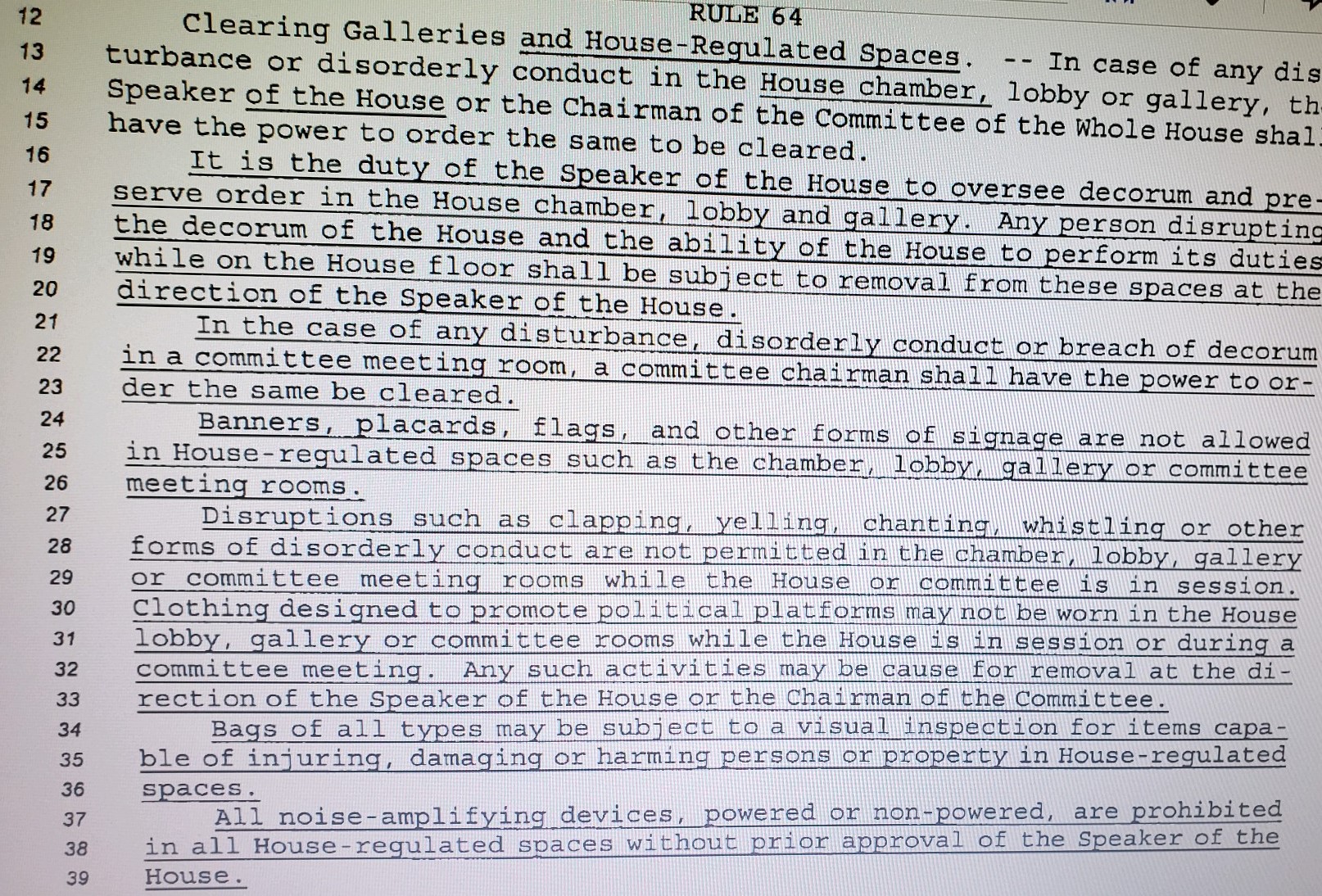