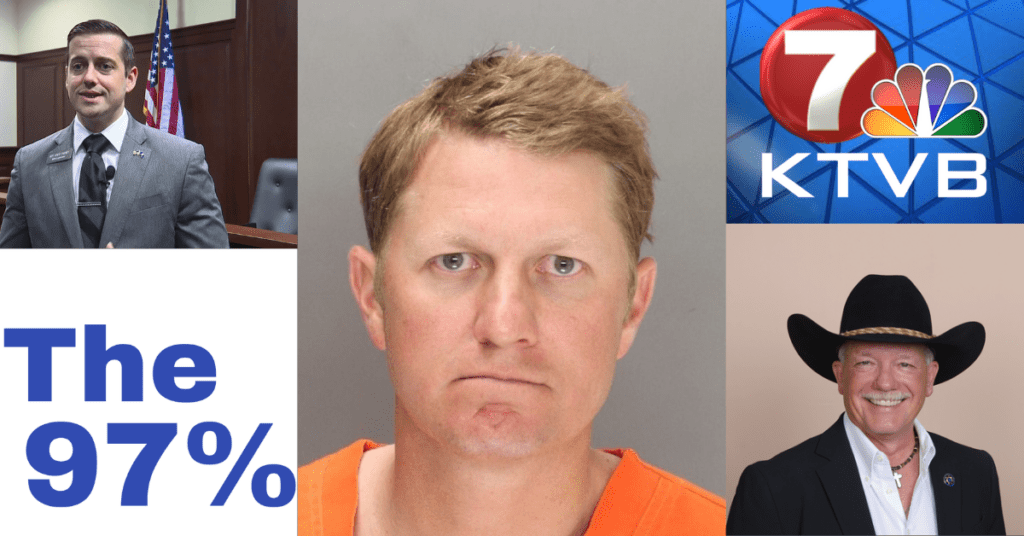 Why was the media, liberal groups, Idaho GOP establishment, and victim’s organizations silent on Caldwell mayoral candidate John McGee who is a convicted criminal, charged with sexual assault as a State Senator and ultimately convicted of “disturbing the peace?”

Did the liberal group Idaho 97% launch a campaign to stop McGee from becoming the mayor of Caldwell? Nope.

Did the media provide non-stop extensive coverage of McGee’s past crimes for which he was found guilty? Nope.

Did the Democrat Party launch an effort to stop McGee because of his past crimes? Nope.

Did the GOP establishment speak out against McGee over concerns of his past crimes? Nope.

What about State Senator Melissa Wintrow (D-Boise) who is seen as the biggest advocate by many of her colleagues for domestic violence or rape victims? She is nowhere to be found either. I’m not claiming any of these people are supportive of McGee, but does his presence in a race to become mayor of one of Idaho’s largest cities not warrant discussion?

McGee resigned in 2012 to avoid facing an ethics hearing. At the time, McGee was the number three man in the Idaho Senate and had also been charged with a DUI and Grand Theft Auto.

Caldwell will have a new mayor for the first time in 24 years, and none of these folks thought it was important to question McGee’s past?

Do you want to see what some of the things McGee did to a staffer, according to the Idaho State Police report? Warning, the following paragraphs contain graphic content that may be disturbing to some readers.

Here are a few excerpts from the 45-page report from the Idaho State Police that quote McGee told a staffer who sat down with detectives in 2012:

“Just pull your pants down and your shirt up and give me something to look at.”

“I do not want you getting drunk and telling all of your friends that I wanted to see your pussy.”

McGee allegedly masturbated in front of the staffer. To my knowledge, McGee never disputed any of the things said in the ISP report.

Then, there are descriptions of other things McGee did to the staffer according to the ISP investigation. Here are a few of those excerpts from their report:

“When she was typing on her computer…he rubbed his private parts up against her elbow.”

“He had asked her to ‘back her ass up to him so that he could just feel her.’ She told him no, but he walked into her intentionally.”

“He got up and locked the door. He sat down in his chair and put his hands down his pants and said to her, ‘Tell me you want to fuck me.'”

“He groped her buttocks and said that they should go to a motel and have sex, and then proceeded to tell her that he had not had sex for a long time.”

“When she got up to leave his office, he told her, ‘this never happened.'”

“He then told her, ‘You know that you owe me.’ When asked what he meant by this, he stated, ‘You know you could do something with your mouth.'”

Again, these things are all acts that McGee did as a legislator, according to the ISP investigation. He was charged with sexual assault after the police investigation but ultimately pleaded down to disturbing the peace, in large part, I am told, because the victim wanted to move on with her life.

So, the big question again is, why did all of the groups who went after Aaron von Ehlinger earlier this year not say anything about McGee, who is now in a runoff for MAYOR of Caldwell?

Is there a certain timeframe where a man, I believe is a sexual predator, is running for public office is okay to do so again? For example, if von Ehlinger ran for office in nine years, is the Idaho 97%, the media, GOP establishment, and victim’s groups gonna be okay with that? Heck, if von Ehlinger is found “not guilty,” would these same people be silent if he ran for office again? I seriously doubt it.

What was even more stunning to me is that some in the GOP establishment actually endorsed McGee!

Some of them donated money. Others simply did a video endorsement of McGee.

Rep. Greg Chaney (R-Caldwell), listed on the complaint against von Ehlinger, donated money to McGee and endorsed him in a video on McGee’s Facebook page.

Check out Chaney’s video endorsing McGee which, we pulled from McGee’s campaign website:

What about the endorsement from Canyon County Sheriff Kieren Donahue? Donahue is known as an advocate for domestic violence victims. So Donahue is okay with McGee despite what happened at the Idaho Capitol?

Perhaps that is the reason they are all silent or even supporting McGee openly is that it was a “long time ago.” Is there a timeframe where we just don’t care anymore about these types of serious issues?

“Greg, we must forgive McGee for what he did.” But, look, it’s not my job to judge McGee’s sins. That’s between him and God.

But you have to ask whether or not we want to TRUST someone in a position of power, like Mayor, not to revert to their old ways. Politics is dangerous for people with bad habits or an inability not to get sucked into the temptation of using power over others.

I spoke with many Caldwell citizens about this issue, and NONE of them said that McGee shouldn’t be able to live a life, have a career, and try to make sure he stays out of trouble. But those same people said they just didn’t trust the guy being in a position of public power.

It’s this type of hypocrisy we see from these groups concerning McGee or other sexual deviants like former Rep. Christy Perry and current State Senator Jim Guthrie (R-Inkom) that frustrates conservatives.

If von Ehlinger is guilty, then he should be held accountable and never serve in public office again, in my opinion.

As for McGee, he is now in a runoff for Caldwell Mayor, which takes place on November 30. Jarom Wagoner got over 40% of the vote but did not get the 50% required to avoid a runoff.

McGee eeked into the runoff by beating conservative candidate Chris Trakel by just 14 votes and garnering 22% of the vote.

To date, the only organization to speak out against McGee was the Republicans Against Unethical Politicians. The Political Action Committee is led by a former staffer of McGee’s who says she was locked in a room with him too but managed to escape.

The group even put up a billboard with McGee on it and launched a website to target his past actions as a State Senator. (story continues below.)

Some media outlets in the final days did cover the Caldwell race, and I tried to cover the race fairly and accurately for the Idaho Dispatch. I also did the same for the von Ehlinger situation.

One has to wonder, will these same groups say something now or continue their hypocrisy? Time will tell.