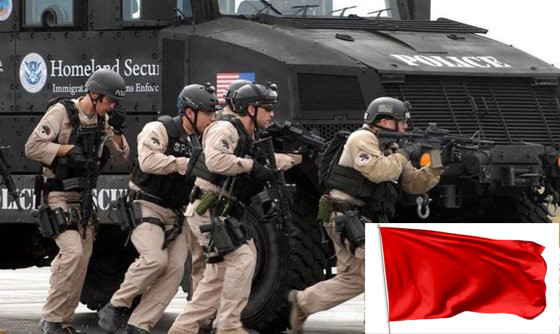 Have you ever seen the movie Minority Report? In the Tom Cruise thriller, several people called “precogs” can see into the future and determine who is going to commit murder. However, before the murder takes place, the police go and arrest the individual and lock them away for life. The individual didn’t actually commit the crime and isn’t given the opportunity to defend themselves in court. In the end, Tom Cruise’s character exposes several flaws in the system, primarily the decision of a person to be able to choose their own path, not what others predict that person is going to do.

The movie, while entertaining, would never really happen in a country like the United States right?  We value due process and we don’t take away people’s rights without that person committing a crime right? We make sure they have the ability to defend themselves in a court of law before those rights are removed right?  That’s how it used to be – until recently.

Several years ago we started seeing the term “red flag law” and “extreme risk protection order” pop up. These laws were being pushed in an effort to “stop crime before it happens.”  Sound familiar? The purveyors of such laws tell citizens that in order to stop “mad” or “crazy” people from harming themselves or others, these “red flag” laws are necessary.

So how exactly do these “red flag” laws work? There isn’t one answer for this as states implement them differently. Generally speaking, the police are notified by someone (usually an immediate family member) that a person is a threat to themselves or others. The police gather evidence from the family member(s) and take it to a judge.  The judge then determines if there is sufficient evidence of a threat. If he believes there is, he then issues an order for the police to confiscate the individual’s guns.

And that’s exactly what these “red flag” laws are – gun confiscation orders!

While some states have limited these gun confiscation orders to “immediate family” members, other states are already expanding their orders to include neighbors, principals, teachers, and others who are now the new American “precogs”. And just like in the movie, the American “precogs” predict your future crime and the police “stop” you from ever doing it.

And the list of these American “precogs” is likely to continue. Facebook followers, Twitter followers, online associates and more will probably be added in the future. And it won’t take but one mass shooting to expand it even further. One shooting, where a perceived threat was made to someone not on the current “precog” list, and the government tells you they must expand it.

Take the Parkland killer for instance. He let his fellow video gamers know that he wanted to harm people. Florida, who just passed their gun confiscation law, could simply say that they need to include people who associate with you in online forums to prevent another Parkland-style massacre. Then the Florida “precog” list grows.

We may get to a point where someone saying something is enough “evidence” to presume you are going to commit some horrific act. Many people have yelled at someone in the heat of the moment that they would “kill” them. Perhaps they sent a text message with similar “threats.”  They have no intention of carrying out those threats but now the family members, or neighbors, or doctors, these new American “precogs,” get to determine your guilt for you.

At what point do they just throw out evidence and start looking at entire classes of people and deem them all “dangerous?”  What about Veterans with PTSD? What about people of a certain political ideology? The reality is, once the government has the power and the ability to implement these orders, justification will be made to expand gun confiscation orders farther and farther.

Michael Bloomberg and his gun control groups, Everytown and Moms Demand Action, are pushing these laws hard across the country right now in Republican and Democrat-controlled states.  They have made it one of their top legislative priorities.

Nine states in total have implemented some form of these gun confiscation orders. They are Oregon, Washington, California, Florida, Indiana, Delaware, Rhode Island, Maryland, and Vermont. And several other states are looking at implementing them as well, including Texas.

Remember, no crime has been committed and the person who loses their rights did NOT get to defend themselves before those rights were removed. The gun control crowd has the audacity to call this “due process.”

It’s not due process if you aren’t part of the process.

Going to court AFTER your guns have been removed, to petition to get them back, is also not due process.

Gun owners must stand up and fight back against any form of these “red flag” laws. We don’t live in Minority Report, and we can’t allow our country to be turned into a place that removes rights and imprisons people for crimes they haven’t committed.

There can be no compromise on this issue.

Draw a line in the sand and tell your state legislators “No gun confiscation orders here!”

Be sure to check out my podcast on this same issue for more details by clicking the link here or on the image below! And be sure to Subscribe to our channel by clicking here!

7 thoughts on “Why Gun Owners Must Oppose “Red Flag” Laws!”