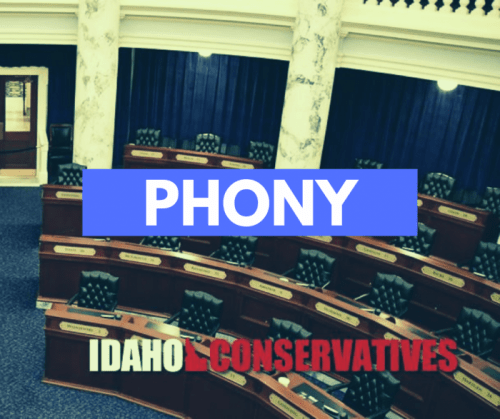 (The following article was written about the state of Idaho. However, every state has these same types of phony groups who pretend to be defenders of liberty but are simply a front for progressives in the Republican Party.)

Are You Being Hoodwinked by “Idaho Conservatives?”

The winds are changing in Idaho.

The radical progressives on both sides have grown tired of the “liberty movement” here.

Media outlets and phony “conservative” groups have begun a relentless attack on any Representative, group, or activist who believes in individual liberty and freedom in Idaho.

One such phony group is “Idaho Conservatives.”

For many actual conservatives in Idaho, the title of the Facebook Page is going to be rather deceiving. When you go to a Facebook page with the title “Conservative” in it, you expect the page to be a place where Bernie Sanders, AOC, Democrat policies, and radical progressivism are relentlessly attacked.

You will find SOME of that on Idaho Conservatives. However, this is where the hoodwinking begins.

“Idaho Conservatives” have written several articles attacking these fine people. They also share ones written by the liberal media.

They place them in between articles that will fire up the conservative base. This is deliberate deception on their part, meant to lure you into their way of thinking without being forthright about it.

Here is a sample of what I am talking about. Please note the date and time stamp of these posts on their Facebook page. Posts are broken up by a caption in bold and red text:

Sometimes they add no additional commentary to their posts. They simply throw out a hit piece by one of Idaho’s liberal news outlets, or their own, and hope that you question the liberty-minded folks.

If there is a backlash in the comments section over one of the hit pieces, you can rest assure a pro-2nd Amendment article is coming just around the corner. Perhaps a post about President Trump?

It’s all designed as an attack on the liberty movement in Idaho.

Who are they attacking here in Idaho? It certainly isn’t the establishment progressives in the Republican Party.

Here is just a partial list of those they have already attacked:

You see, the real aim of Idaho Conservatives, despite their claim to the contrary, is to destroy and humiliate anyone who is part of the liberty movement in Idaho.

They claim their goal is to have an “inclusive environment” about the issues, but they have instead poured gasoline on Idaho’s liberty lovers and lit the match.

In addition to these attacks, they continue to deceive the public about who runs “Idaho Conservatives” and what they really want.

The people behind the effort are sitting in hiding.

We know that Gregory Graf has been a major part of Idaho Conservatives. Heck, he may have started the whole thing. I exposed his lies and deception in a video I did in early 2019 that you can see here. He works for Melaleluca down in the Idaho Falls area.

Jennifer Ellis is a rancher from Blackfoot. She wrote one of the most poorly put together attack pieces I have ever seen.

Jeff Hough is an author, speaker, and digital marketer according to “Idaho Conservatives” own website.

I’ve never heard of any of these people prior to their attacks on my liberty-loving friends or myself.  Given the location of most of them, it wouldn’t surprise me if they all had ties to former Rep. Julie Van Orden, former Rep. Tom Loertscher, or current Rep. Doug Ricks.

In fact, I have seen Julie Van Orden commenting on several of their posts. I’ve also seen the Loertscher family and the Ricks family commenting frequently on their posts. These are all well-known establishment Republicans who rather enjoy big government.

Some of them have had family members who were Representatives ousted by liberty-loving voters in their District.

But these people are just names on paper so to speak.

Who is funding it? Who runs the Facebook page? Who runs the website? Who is on their board? Are current Idaho legislators helping to fund or run it?

These are questions you will likely never know. They claim that the individuals behind their group want to remain anonymous to protect their identities.

There’s a word to describe people like that: Cowards

If you can’t stand the heat, then get out of the kitchen.

The people behind “Idaho Conservatives” would NEVER have signed the Declaration of Independence. During the Revolutionary War, they would have stood with the king or hid in a corner during the fight.

Does any of this sound conservative to you? I didn’t think so.

Idaho Conservatives say that the liberty movement in Idaho is hijacking the Republican Party.

However, a simple comparison of the Republican Party platform with the stances and beliefs of the numerous individuals and groups they have attacked would reveal very close alignment.

The real hijacking is from big government progressives within the Republican Party, like the folks from “Idaho Conservatives,” who want to continue to grow government at an unsustainable rate.

“Idaho Conservatives” is nothing more than a front group for cowardly progressive Republicans (read liberals) who are afraid to come out and stand toe-to-toe with you.

The liberty movement in Idaho is alive and well.

The left-wing Idaho media and phony conservative groups have declared war on restoring our country to its former glory.

You have a decision to make.

Will you stand with us or stand with the Red Coats who are attacking us?