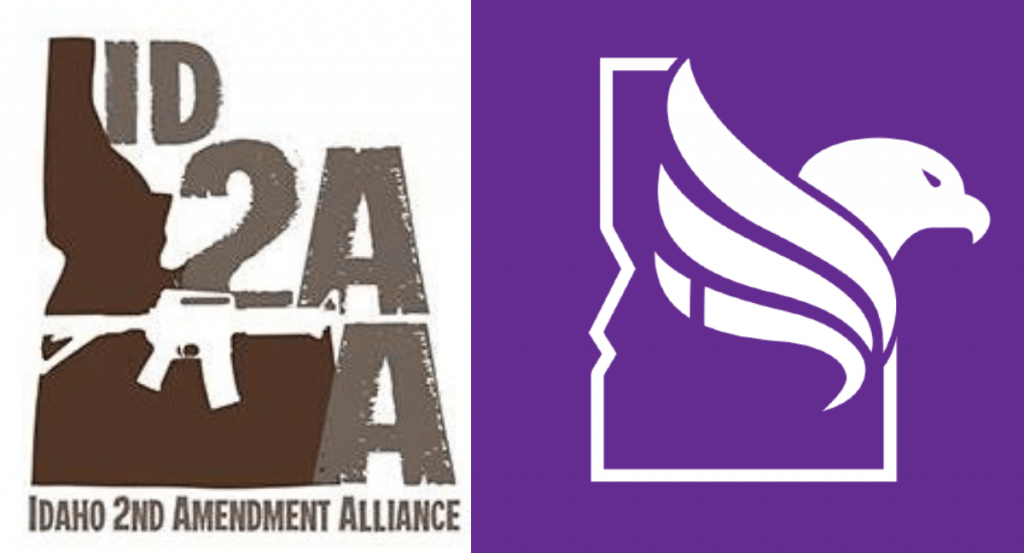 Most Republicans want you to believe they care about the “little” guy.

They routinely talk about how they hate leftist groups funded by wealthy people. Groups like Moms Demand Action that are funded by Bloomberg are almost universally hated by Republicans.

Even establishment candidates blast these groups as not being “grassroots” or not being a voice for Idahoans.

However, when election time comes around in Idaho, it is the actual grassroots or local groups that come under fire from the establishment.

Both groups have massive grassroots support and routinely seek out the voice of Idahoans to help support legislation expanding freedom in Idaho.

During the election cycle, both groups educate voters on votes cast by Idaho legislators. Both organizations help voters understand where candidates stand on various issues facing our state.

It’s during the election cycle that you hear the loudest whining and crying from these establishment candidates.

Accountability from local organizations is not something a RINO wants to face when they are trying to get elected.

The legislative races are where RINOs look to big lobby organizations for help.

They want their money and endorsements.

What the establishment knows is that the big national groups rarely hold them accountable. Sure a vote may dock their rating but outside of that, not much will happen during the race.

The NRA for instance, even though they have ratings and endorsements, will not expose what happens in the committee process or statements made by a candidate. They rarely do mailers for state legislative races.

So, it’s easy for candidates to get sucked into only caring about the NRA because they know the NRA won’t dig deeper.

I can’t tell you how many times I have heard RINOs tell me they don’t want to fill out the ISAA survey because they don’t like “3rd Party” surveys. Yet if you ask them if they filled out the NRA survey they will tell you “yes.”

So, either those candidates are lying to their potential constituents or they are trying to avoid accountability with their voters.

Take Dave Radford who is running for State Representative in District 32. He admitted openly to filling out the NRA survey and bragged that he refused to fill out the ISAA survey. 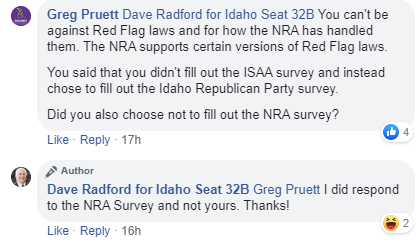 Is Dave going to fight for his constituents if he gets elected given his attitude toward grassroots gun owners?

Some of these candidates claim that even if they filled out our survey 100% that the ISAA would attack them no matter what. That simply isn’t true.

For instance, Rep. Tammy Nichol’s opponent filled out the ISAA survey with 100% pro-2nd Amendment answers. We posted his results for everyone to see!

The hatred for local political organizations by people like Dave Radford should be a huge indicator of how they will vote once they are safely in office. Not only that, but a quick look at their campaign donations will be quite revealing as well. Don’t be surprised to find that many of these candidates have a lot of donations from special interest groups flowing into their campaign coffers.

Nearly all RINOs are funded by “special interest groups” who have high paying lobbyists at the capitol.

The Idaho Freedom Foundation, a group focused on limiting government power in numerous areas of government, also exposes RINOs at the capitol.

Actually, the RINOs expose themselves with their votes, but the IFF rating system helps educate voters.

The IFF ratings are based on whether a bill expands or limits government. The bills are rated BEFORE a vote ever takes place.

This rating system helps voters understand whether their elected official is upholding their campaign promise to limit government.

The RINOs weep and gnash their teeth when their voting record is exposed by the IFF.

Yet they all seem to care about what the American Conservative Union, a national lobbying group says and how they rate a handful of bills.

You see, the ACU usually only rates about a dozen bills. The IFF on the other hand rates dozens of them.

However, if you compare the ratings of the ACU bills and the IFF bills they are generally the same.

The IFF just rates more bills than the “big ones” that can sometimes be easy for Republicans to vote for.

The frustrating part for RINOs is that both of these groups expose their liberal leanings and when voters find out, they don’t like it.

Gone are the days when RINOs could get away with lying to their potential constituents for being “solid conservatives.”

Accountability is a terrible thing for a candidate who only wants to answer to big-money groups. Most of these candidates, once they are in office, know that voters will largely forget their votes and won’t pay attention to what is happening during the session.

However, local groups have changed the way voters are informed.

Local accountability helps keep candidates honest. If a candidate doesn’t want to respond to local groups, the voters will decide what that means.

The IFF and ISAA’s accountability of candidates to their voters is why both groups are viciously attacked by RINOs.

Unfortunately for the establishment machine, both groups are run by grassroots Idahoans who enjoy the information provided by them.

2020 is turning out to be one of the most intense election cycles I have ever seen.

The attacks from RINOs on the ISAA and IFF are unlike anything I have ever seen. It would appear that informed voters about the truth of where a RINO stands are not appreciated by some of these candidates.

In the end, voters will determine which candidates they want to represent them in office.

One thing is for certain, the ISAA and IFF aren’t going away anytime soon and the attacks on these organizations will only fuel their growth.

With all voters voting by absentee ballot only for the primary, grassroots conservative candidates are at a disadvantage as big lobby money flows to establishment candidates.

That’s why educating voters based on a candidate’s voting history and answers to important questions is even more crucial.

If you want to see the results of the ISAA 2020 Legislative Candidate Surveys: https://www.idahosaa.org/2020survey/

To see the results of the IFF 2020 Legislative  Candidate Surveys: https://idahofreedom.org/survey2020/