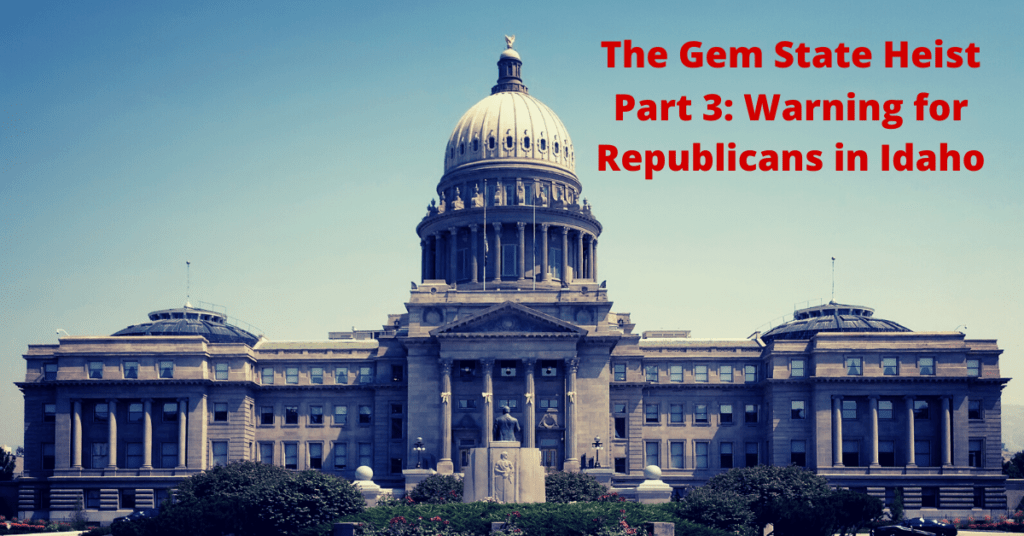 In the first two articles of The Gem State Heist, we covered how the liberal’s effort to turn Idaho “blue” has already begun and showed you that liberals have already mobilized in our state.

If we are going to keep Idaho from turning into the next liberal stomping ground, then we must continue educating ourselves on what happened in other states. Idaho’s conservatives can’t afford to sit back and do nothing as liberals in both parties try to keep us from taking on this fight against the leftists.

Part 3 of the Gem State Heist is a warning to Republicans in Idaho about what is happening inside our own party.

This article is meant to warn you that there are elements of the Republican party who are going to help the liberals, on purpose or inadvertently, in trying to take out the conservative movement.

Before I show you some specific examples of what is already happening in our state, let’s look at the big picture.

These more moderate Republicans will be the death of Idaho. They are perhaps more dangerous to the effort to keep Idaho free than the liberal groups themselves.

How is that possible? How can moderate Republicans be more of a danger to Idaho’s “redness” than the liberal groups we have already highlighted?

There are several aspects to this issue.

First, these RINOs (Republicans In Name Only) think that by helping the liberals take out the conservative wing of the party that they will then be left alone to moderate Idaho into the next California. The problem is that these RINOs don’t realize that they are the next targets once the conservatives have been eliminated.

Remember back in 2012 when Mitt Romney was running against Barak Obama? Remember how the liberals painted Mitt Romney as a “far-right” extremist?

The RINOs are already promising to help take out conservatives during the 2022 elections here in Idaho. If conservatives are removed, look for the liberals to then turn their sites on the moderate wing of the party. We’ll get to more specific examples in just a moment.

The second major problem, and perhaps the most concerning, is that RINOs will keep Republican voters apathetic to what is happening.

I can’t tell you how many times I have seen RINOs tell me that Idaho is too “red” and that it “can’t happen here.” They will try and convince you that the numbers aren’t there for the liberals to flip the state.

Tell that to the Republicans in Colorado, California, Oregon, and Washington.

I’m not sure why people feel that Idaho is untouchable, but I am not one of those people.

Idaho is one of the last places, if not the last place, for conservatives to flee. If we don’t stand up and defeat the liberals here, then where else are you going to go?

Why then do we buy into this notion that Idaho can’t be defeated if we are lazy and don’t learn from the mistakes of these other states?

Yet the RINOs are convinced Idaho is untouchable, and I get attacked frequently for “fearmongering” and other labels because I am trying to wake Idaho’s Republican base up to what is already happening. Expect to get mocked relentlessly by these RINOs for sounding the alarm bells.

I want to give you some examples of people who have identified as Republicans and are actively helping and encouraging other people to support the liberals in fighting against Idaho’s conservative legislators.

Let’s start with someone most of you don’t know and really shouldn’t concern yourself within the grand scheme of things, Gregory Graf.

A political activist down in southeast Idaho, Graf quite literally spends every waking moment of his day attacking conservatives. But it isn’t enough for him to have a different ideology than the conservatives in the party. Graf is openly advocating for the liberal group “Reclaim Idaho” to fight against the conservatives as well.

Here is one of Graf’s tweets where he tells the group that they should get involved in the REPUBLICAN primary! 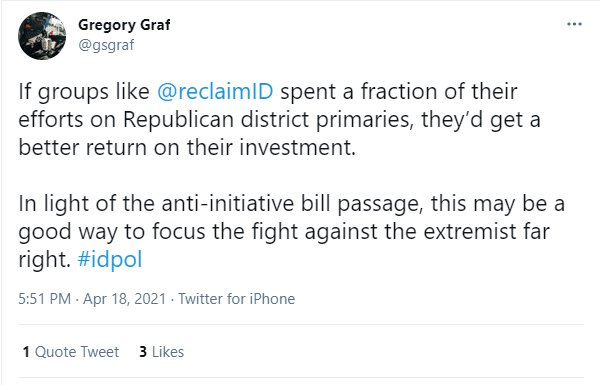 Again, remember that to these RINOs, anyone to the right of Mitt Romney is basically Hitler. You’ll see Graf and other “Republicans” like him using the term “far-right” and “extremist far-right” to paint anyone who believes in constitutional principles and Republican values of limited government as “radicals.”

But is this mindset limited to the no-name RINOs? No. Sadly, there are some more high-profile people also pushing Republicans to help the liberals take on the “right-wingers.”

Remember the group I mentioned in Part 2 called the “Idaho 97%?”

In case you forgot, here is that group of radical liberals calling a couple of bills (SB 1136 and HB 135) that almost every Republican voted for “extreme:”

And remember, this is the same group whose co-founder was Michael Bloomberg’s gun control lobbyist and radical leftist, Emily Walton. Walton has one of the deepest hatreds for Republicans I have ever seen in Idaho.

Of course, Walton and the Idaho 97% have every right to fight for their liberal ideals because this is America, but you have to wonder why former “Republican” Ada County Sheriff Gary Raney is openly advocating giving these people money. 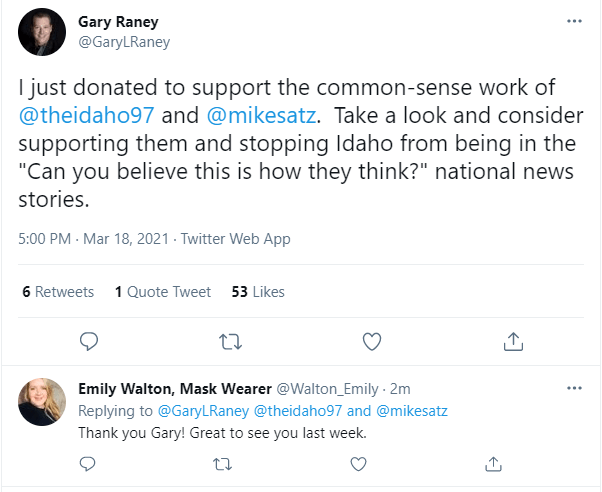 Did you notice who supported Raney donating to their cause? Radical leftist Emily Walton loves that this “Republican” is going to be helping do their progressive bidding. 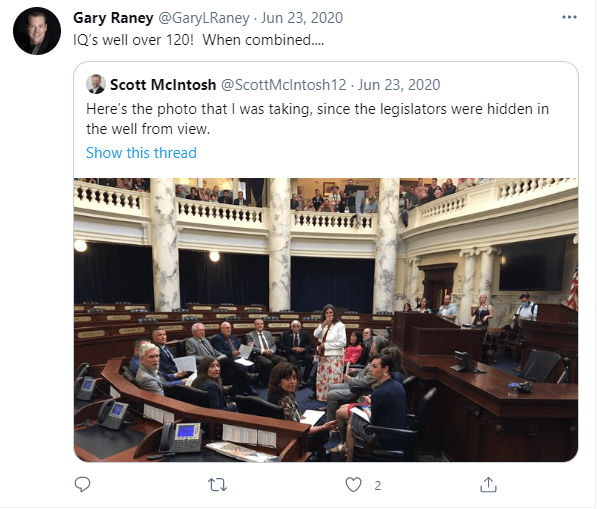 In this picture, over a dozen Idaho legislators met to try and discuss what their options were during COVID-19 in trying to have a say in the decision-making process. Raney mocked them by saying their combined IQ was only 120 points.

Now, what about the money? You can’t really make massive changes in Idaho without a decent chunk of change.

Remember, it was four wealthy individuals in Colorado that flipped that state. Are we going to see wealthy people here start helping these liberal groups?

Sadly, it looks like Dr. Tommy Ahlquist is already helping the liberal groups fight against the conservatives here in Idaho.

Ahlquist has been very hostile to the more conservative wing of the party since his gubernatorial run. I have never had any personal issues with Ahlquist, and he has been a supporter of the 2nd Amendment from the time I have known him. So, I’m not sure if he has been deceived into thinking he is helping or if he is doing what he is doing with intention.

When Ahlquist ran for governor back in 2018, he ran as a hard-line conservative like Raul Labrador. The two of them practically ran similar campaigns, but Ahlquist has now decided to unleash on the conservative movement in Idaho.

In addition to that, he is heaping praise on liberals like Dr. Marlene Tromp (BSU President) as well as Boise Mayor Lauren McLean. He also donated to the re-election campaign of Democrat Diana Lachiondo, who lost her bid to retain her seat as Ada County Commissioner.

Here is a tweet of Ahlquist attacking conservative legislators in Idaho: 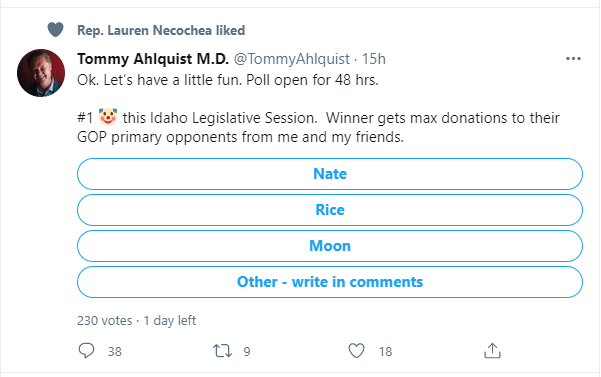 His tweet was also “Liked” by Democrat lawmaker Rep. Lauren Necochea. In fact, many of Ahlquist’s recent tweets are “liked” by radical leftists and Democrat politicians.

Here is a tweet Ahlquist shared where the original tweet said that Idaho needs to become a “progressive” state (liberal).

And here is Ahquist also showing his support for the liberal 97% group, Emily Walton (the 2nd tweet), and the impeachment of President Donald Trump by Mitt Romney:

I also want to note that on the first tweet, “Dustin Manwaring,” a “Republican” legislator from Pocatello, supported Ahlquist’s tweet attacking conservative lawmakers.

There are other names too. Former “Republican” Lt. Governor and now windbag liberal Bob Kustra attacks conservatives through the Idaho Statesman almost weekly.

Finally, Republicans in Idaho have to realize that Democrats are openly advocating for voting in the Republican primary, and you can be sure that they are also running for office as Republicans.

Here are several tweets of these liberals saying they will vote in the Republican primary (story continues below): 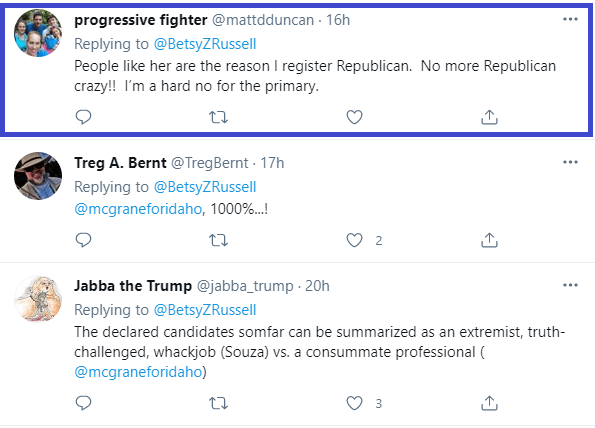 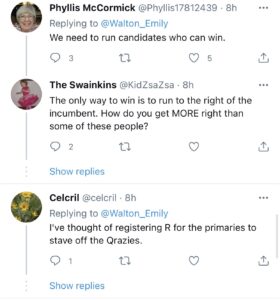 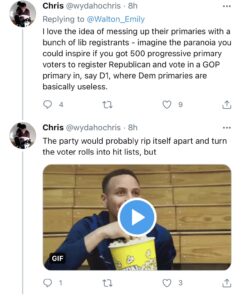 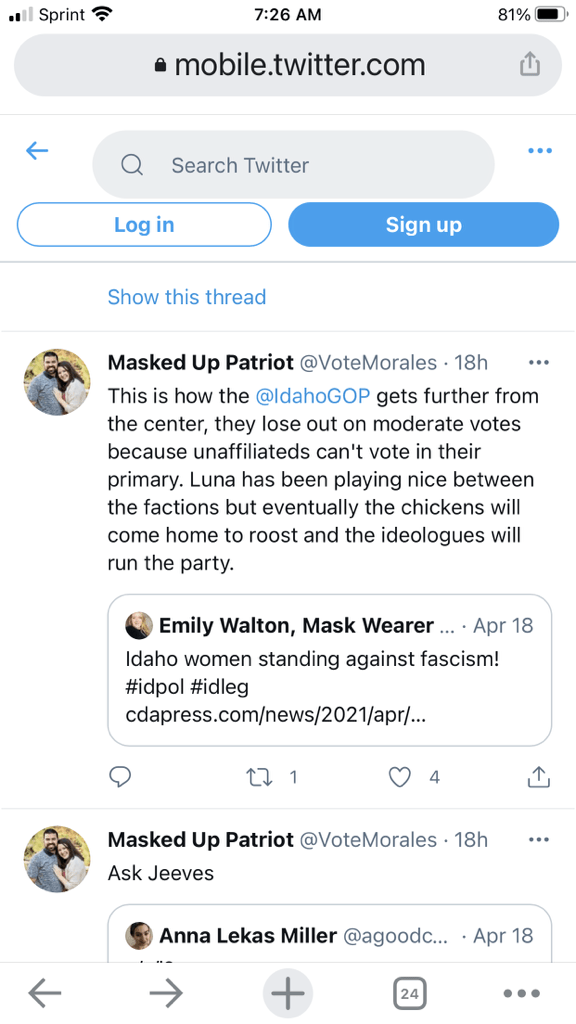 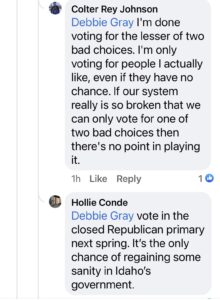 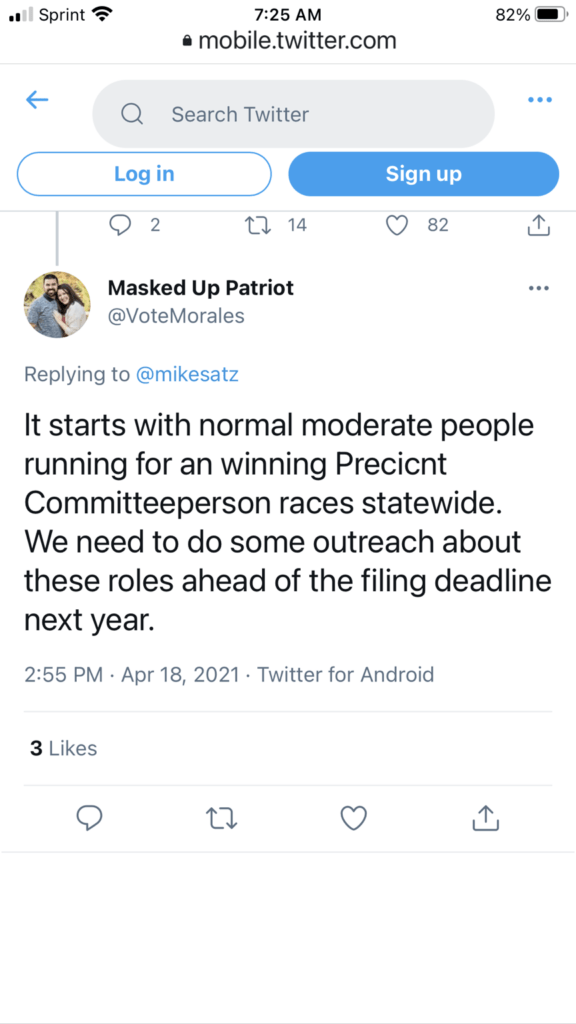 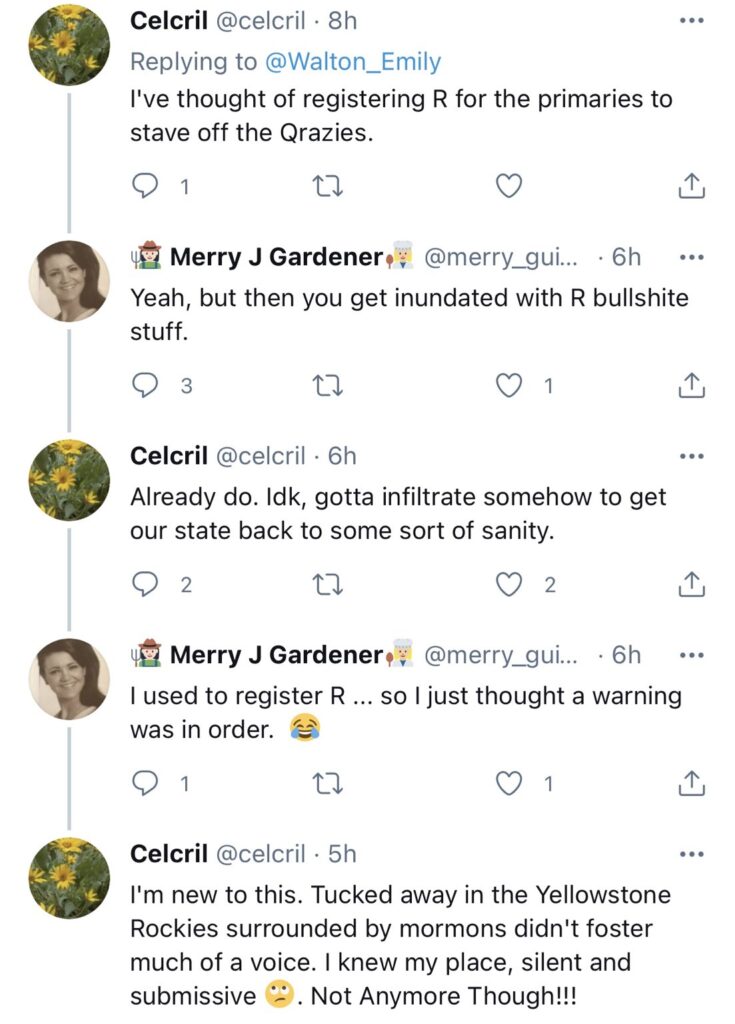 Republican voters are going to have to do a much better job of vetting their candidates. And I am not just talking about the candidates at the statewide level.

Do you know who is running for your state legislature, county commissioner races, or your precinct committeeman races?

Liberals are trying to infiltrate the Republican party at all levels, and that’s why voters have to be very cognizant of who they are voting for. We have to then hold them accountable for the promises they make on the campaign trail.

The liberals are going to come hard at Idaho’s conservative base in 2022. If they are successful in taking out a bunch of the conservatives, then they will turn their sights on the moderates.

If you want to be a moderate Republican, you have every right to be so, but just realize that your moderation and caving to the liberals will only ensure that Idaho turns into the next California.

Bowing to the liberal mob has never worked at the congressional level; it certainly won’t work at the state level, and it has shown not to work in any other state.

It’s time to stand up and fight back against the liberals and the RINOs who are helping them destroy this beautiful state.

3 thoughts on “The Gem State Heist Part 3: A Warning to Idaho Republicans”